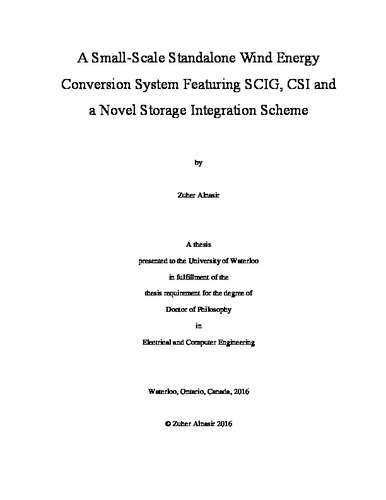 Small-scale standalone wind turbines provide a very attractive renewable energy source for off-grid remote communities. Taking advantage of variable-speed turbine technology, which requires a partial- or full-scale power converter, and through integrating an energy storage system, smooth and fast power flow control, maximum power point tracking, and a high-quality power is ensured. Due to high reliability and efficiency, permanent magnet synchronous generator seems to be the dominating generator type in gearless wind turbines, employed for off-grid applications. However, wind turbines using geared squirrel-cage induction generator (SCIG) are still widely accepted due to their robustness, simplicity, light weight and low cost. Permanent magnet induction generator, a relatively new induction-based machine, has recently been recognized in the wind energy market as an alternative for permanent magnet synchronous generator. A thorough comparative study, among these three generator types, is conducted in this research in order to enable selection of the most appropriate generator for off-grid wind energy conversion system (WECS), subject to a set of given conditions. The system based on geared SCIG has been shown to be the most appropriate scheme for a small-scale standalone WECS, supplying a remote area. Different topologies of power electronic converters, employed in WECSs, are overviewed. Among the converters considered, current source converter is identified to have a great potential for off-grid wind turbines. Three current-source inverter-based topologies, validated in the literature for on-grid WECS, are compared for off-grid WECS application. Feasibility study and performance evaluation are conducted through analysis and simulation. Among all, the topology composed of three-phase diode bridge rectifier, DC/DC buck converter, and pulse-width-modulated current-source inverter (PWM-CSI) is identified as a simple and low-cost configuration, offering satisfactory performance for a low-power off-grid WECS. A small-scale standalone wind energy conversion system featuring SCIG, CSI and a novel energy storage integration scheme is proposed and a systematic approach for the dc-link inductor design is presented. In developing the overall dynamic model of the proposed wind turbine system, detailed models of the system components are derived. A reduced-order generic load model, that is suitable for both balanced and unbalanced load conditions, is developed and combined with the system components in order to enable steady-state and transient simulations of the overall system. A linear small-signal model of the system is developed around three operating points to investigate stability, controllability, and observability of the system. The eigenvalue analysis of the small-signal model shows that the open-loop system is locally stable around operating points 1 and 3, but not 2. Gramian matrices of the linearized system show that the system is completely controllable at the three operating points and completely observable at operating points 1 and 3, but not 2. The closed-loop control system for the proposed wind turbine system is developed. An effective power management algorithm is employed to maintain the supply-demand power balance through direct control of dc-link current. The generator’s shaft speed is controlled by the buck converter to extract maximum available wind power in normal mode of operation. The excess wind power is dumped when it is not possible to absorb maximum available power by the storage system and the load. The current source inverter is used to control positive- and negative-sequence voltage components separately. The feasibility of the proposed WECS and performance of the control system under variable wind and balanced/unbalanced load conditions are analyzed and demonstrated through simulation. Finally, the proposed WECS is modified by removing the dump load and avoiding the surplus power generation by curtailment of wind power. The operation of the modified system is investigated and verified under variable wind and load conditions.