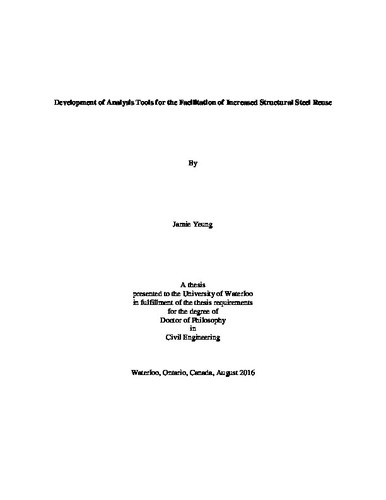 Reuse of structural steel can be more attractive than recycling in many cases, if associated costs and risks are lowered, and if externalities are considered. The costs and risks typically associated with steel reuse arise through the unknown capacity of reused components and increased deconstruction activities that may be required to extract the components. Externalities include such aspects as environmental impact, which is commonly accepted as a benefit to reuse as an alternative to recycling. Low-rise structures are particularly attractive for structural steel reuse, as these structures typically lack steel fireproofing, which can be difficult to remove. Low-rise structures also facilitate efficient deconstruction processes. Geometric characterization is demonstrated in this research to have a key role to play in the decision process for each case of potential steel reuse, because it is used to identify unknown in-situ steel sections and assemblies, and it provides necessary input to structural design reliability analysis of reused steel. In this way, geometric characterization can contribute towards lower reuse costs and lower risk of component failure. Its key role is further validated through a series of 3D imaging experiments and associated reliability analyses. Semi-automated and line fitting techniques were utilized to understand the impact of the identification algorithm on the resulting phi factor results. It is concluded that semi-automated geometric characterization can support increased steel reuse through reduced identification costs and improved reliability. A new set of methods and an understanding of their utility in making reuse more attractive through reduced costs and improved reliability is thus contributed. It was identified that low occupancy structures present an opportunity for improving the phi factor comparison between reused and new steel components. This research also contributes towards decision makers’ and society’s understanding of the life cycle impacts of reuse as an alternative to recycling by presenting a streamlined life cycle analysis methodology based primarily on process models. This methodology consists of a comparative life cycle analysis between recycling and reuse of structural steel components. The application of this methodology is demonstrated through its use in a case study. The results of this case study indicate that a significant reduction in some life cycle impact metric values, particularly greenhouse gases, can result from reusing structural steel rather than recycling it. The impact of the methodology developed and the results of this study on reuse decisions will also be influenced by prices placed on air pollutants, greenhouse gases, water, and other impact elements by society and local markets. Current price indexes support recycling as the lower market cost alternative, but relatively small changes to economic conditions could result in reuse being the less expensive alternative.