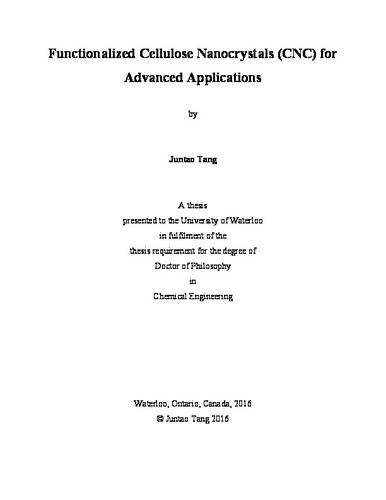 Cellulose nanocrystals (CNC) are excellent candidates for various potential applications as they possess many attractive characteristics. The unique properties and the abundant, renewable nature of CNC is of great interest in enhancing existing forest sector products as well as in the development of improved products for various industrial sectors. This PhD study is to exploit new potential applications by modifying this sustainable bio-nanomaterial (CNC) with various types of functionalities and taking advantages of their unique properties. At the same time, fundamental understandings necessary for their applications were elucidated, and the knowledge are critical for the design and development of various types of functional CNCs. Firstly, a weak polyelectrolyte, poly[2-(dimethylamino)ethyl methacrylate] (PDMAEMA), was grafted onto the surface of cellulose nanocrystals. Stable heptane-in-water and toluene-in-water emulsions were prepared with PDMAEMA-g-CNC. Various factors, such as polarity of solvents, concentration of particles, electrolytes, and pH on the properties of the emulsions were investigated. Using Nile Red as a florescence probe, the stability of the emulsions as a function of pH and temperature were elucidated. It was deduced that PDMAEMA chains promoted the stability of emulsion droplets and their chain conformation varied with pH and temperature, which was used to trigger the emulsification and demulsification of oil droplets. Interestingly, for heptane systems, the macroscopic colours would change depending on the pH conditions, while the colour of the toluene system remained unchanged. Following this, binary polymer brushes, consisting of poly(oligoethylene glycol) methacrylate (POEGMA) and poly(methacrylic acid) (PMAA), were grafted onto the cellulose nanocrystals (CNC-BPB). The physical properties of the CNC-BPB can be controlled by external triggers, such as temperature and pH, which can be utilized to stabilize and destabilize oil/water emulsions. By virtue of the modifications, these bi-functionalized CNCs diffused to the oil-water interface and stabilized the oil droplets at high pHs. When the pH was lowered to 2, strong hydrogen bonds between POEGMA and PMAA chains grafted on the CNC induced the coalescence of the emulsion droplets, resulting in the phase separation of oil and water. This study demonstrates that functional sustainable nanomaterials can be used for small scale oil-water separations, particularly for oil droplet transportation and harvesting of lipophilic compounds. The coating of the cellulose nanocrystal with conjugated polymer, polyrhodanine was conducted and explored. The core-shell nanoparticles displayed reversible colour change in response to pH, confirming their utility as an optical pH indicator. This property was retained when the nanoparticles were transformed into other geometries, such as 2-D films or 3-D hydrogel beads. The core-shell nanoparticles also exhibited promising antimicrobial properties, making it a potential candidate for antimicrobial applications, such as food-packaging, antimicrobial additives and antimicrobial surfaces or coatings. In addition, a green and bio-inspired approach was developed to anchor silver nanoparticles (AgNPs) onto the surface of cellulose nanocrystals using a thin coating of polydopamine on the surface of CNC. The nanocatalyst displayed superior dispersability over pristine AgNPs and was six times more efficient in catalysing the reduction of 4-nitrophenol. In the presence of β-cyclodextrin, host-guest interactions were enhanced, and the catalytic performance of the CNC hybrids was accelerated. This doctoral thesis research contributes to the basic research on cellulose nanocrystals, which will be beneficial to the academic and industrial laboratories. It also advances the fundamental understanding of the behaviour of cellulose nanocrystals, offering novel value-added applications that are beyond the traditional application of cellulosic materials.