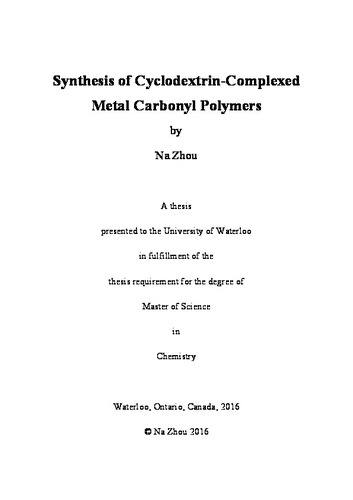 The synthesis of metal carbonyl (MC) polymers has been explored for decades, but well-defined and well-characterized MC polymers are rarely reported mainly due to the chemical instability of MC complexes. To address this challenge, we explored the host-guest chemistry of cyclodextrins (CDs) with MC complexes and used it stabilize MC polymers. The MC polymers were prepared via the post-polymerization modification of poly(vinylbenzyl chloride) (PVBC) with cyclopentadienyl dicarbonyl iron (Fp) anions. The resulting Fp-PVBC subsequently interacted with β-CDs, generating β-CD-complexed Fp-PVBC (β-CD/Fp-PVBC). Compared with Fp-PVBC, the stability of β-CD/Fp-PVBC was significantly improved. The chemical structure of β-CD/Fp-PVBC was characterized using a range of techniques including Fourier transform infrared (FTIR), nuclear magnetic resonance (NMR) spectroscopy, thermogravimetric analysis (TGA) and cyclic voltammetry (CV).