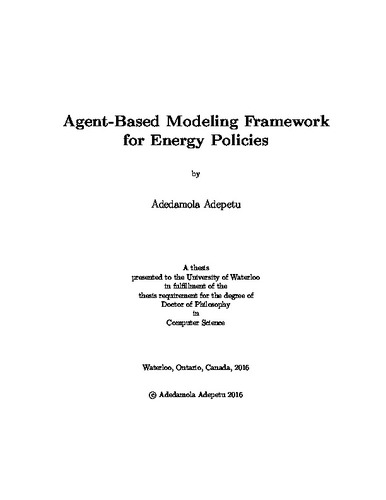 Energy infrastructure systems -- including energy generation, transmission, and distribution systems -- provide consumers with access to energy. Energy systems have been relatively static for several decades but due to recent technological changes such as development of new renewable energy sources, improved sensing and control, and increasingly effective storage technologies, energy systems and the corresponding socio-technical interactions are quickly changing and transitioning into new configurations. In addition, some of these technologies result in changes in consumer behaviour, causing a second-order effect, in turn, on energy systems themselves. The role of policymakers is to guide energy system transitions so as to achieve a certain desired goal. However, implementing an effective energy policy requires a detailed understanding of energy systems as complex socio-technical systems involving human behaviour and human-system interactions. A common approach to evaluate a policy is the use of a pilot study where a group of people in a certain representative geography are selected and the policy is tested in real-world circumstances. The downside of pilot studies is that they can be expensive, with costs up to millions of dollars, and it is impossible to evaluate more than a small handful of policy alternatives. The goal of this thesis is to provide energy system stakeholders with a tool to estimate and evaluate the potential impacts of new policies and technologies, guiding the transition of energy systems. To do so, we design and propose an alternative approach for evaluating energy policies: a data-driven agent-based modeling framework. While other system modeling techniques are known in the literature, Agent-Based Models (ABMs) have long been used to study socio-technical systems and they capture the emergent system properties resulting from the actions of adaptive and autonomous agents. In addition, we propose the concept of an energy agent suited for modeling energy systems with ABMs. Using this framework, we have studied the impact of different policies on the adoption of solar panels and batteries in Ontario, Canada, as well as the adoption of electric cars in San Francisco and Los Angeles, California. We also study the response of Ontario residents to Time-of-Use (ToU) electricity pricing, comparing different pricing policies. For each study, we make policy recommendations based on our results.