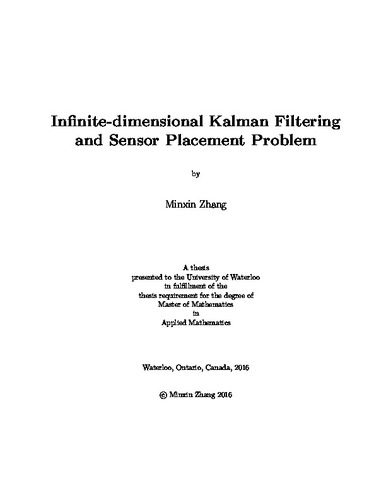 One of the central problems in engineering is to estimate the state of a stochastic dynamic system from limited noisy measurements. A Kalman filter is commonly used for state estimation, which produces an unbiased optimal estimate that minimizes the variance of the estimation error. Many physical processes, such as diffusion and beam vibrations, can be described by partial differential equations. These governing equations may be reformulated mathematically as infinite-dimensional dynamic systems. In this work, the derivation of the Kalman filter for infinite-dimensional linear dynamic systems is reviewed, and the sensor placement problem for Kalman filtering is considered. The optimality criterion for sensor selection and location is to minimize the steady-state error variance, which is shown to be the nuclear norm of an operator that solves an algebraic Riccati equation. Three partial differential equation models are examined: one-dimensional diffusion, simply supported Euler-Bernoulli beam with Kelvin-Voigt damping, and two-dimensional diffusion on an L-shaped region. Optimal sensor locations are calculated for the three models. The sensor noise effects on the state estimation are investigated with the assumption that all the selected sensors are placed optimally. Results show that using multiple low quality sensors can lead to as good an estimate as using a single high quality sensor, provided that enough sensors are used. In particular, for the one-dimensional diffusion equation, approximately proportional relations between the square root of sensor noise variance and the estimation error are observed in simulations.