Enhancing the Modeling and Efficiency of Photovoltaic Systems 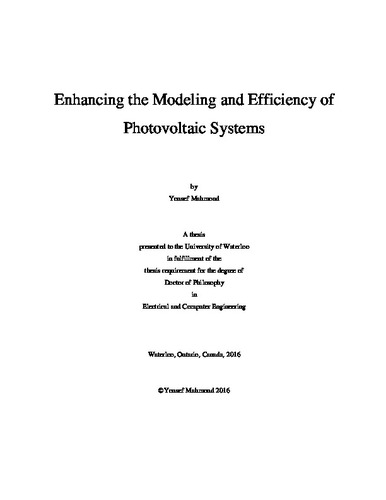 Solar energy is a strong contender among the sustainable alternatives that offer practical potential for replacing increasingly depleted fossil fuels and supplying the world’s growing energy demands. However, despite its sustainability, the spread of its use has been limited due to the high costs arising from its inadequate efficiency. With this challenge as motivation, the goal of the research presented in this thesis was to contribute to the expansion of the utilization of photovoltaic (PV) systems. To achieve this goal, the work was approached from two perspectives: 1) facilitation of research into PV systems through the enhancement of existing PV models and simulation tools, which are highly complex and necessitate substantial computational effort, and 2) improvement of the efficiency of PV systems through the development of new techniques that mitigate power losses in PV systems. With respect to the first perspective, two innovative modeling approaches are introduced. The first, a new circuit model for PV systems, features accuracy comparable to that of existing models but with a reduced computational requirement. The proposed model mimics the accuracy of existing models without their dependency on a transcendental implicit equation, thus providing a shorter computational time without sacrifying the accuracy. The second modeling approach, which was developed for use in model-based online applications, involved the creation of a fast tool for estimating the power peaks of the power-voltage curves for partially shaded PV systems. Utilizing a PV circuit model for estimating the power peaks in large PV systems through the simulation of their entire power curve consumes extensive computational time, which is unacceptable for online applications even with the use of the proposed circuit model mentioned above. Rather than employing a PV circuit model to find the power peaks, the proposed tool relies on simple rules that govern the formation of power peaks in a partially shaded PV system as a means of establishing the power peaks directly, thus significantly reducing the time required. The second perspective led to the development of three methods for reducing different types of power losses prevalent in PV systems. The first is an MPPT technique for use with partially shaded PV systems that exhibit multiple power peaks in their output power curves. The proposed MPPT is uniquely distinguishable because of its ability to eliminate misleading power losses in PV systems. Rather than searching and scanning heuristically for the GMPP, it employs the fast modeling tool mentioned above to calculate the location of the GMPP deterministically, thus avoiding the need for curve scanning. The irradiance values required by the modeling tool are estimated innovatively using captured images of the PV modules obtained by an optical camera. The objective of the second was to reduce the mismatch power losses common in partially shaded PV systems through the development of an improved PV reconfiguration method. The reconfiguration proposed in this thesis is produced by a simple algorithm that establishes a better configuration and requires only negligible computational time for ensuring the minimization of mismatch power losses. The third is an enhanced maximum power point tracker (MPPT) for reducing tracking power losses in PV systems that operate under rapidly changing irradiance levels. The proposed method combines model-based and heuristic techniques in order to accelerate the tracking speed and thus decrease this type of loss. In the proposed MPPT, the temperature measurements typically necessary in any model-based PV application have been eliminated through reliance on a new set of equations capable of estimating the temperature through the utilization of current and voltage measurements.