Application of Risk Analysis and Simulation for Nuclear Refurbishment Projects 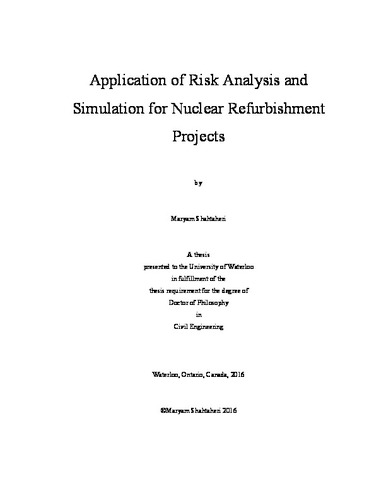 In this thesis, a planning methodology is proposed for nuclear refurbishment projects as a means to address project objectives, influential factors, constraints, and their interdependencies to attain a more reliable estimate of project outcomes. As part of this process, the uncertainty and impact of risk events around project outcomes are taken into account. The proposed methodology consists of two stages. The first stage addresses the impact of commonly identified risks (i.e., Type I risks) and uncertainty on the project outcomes. Also, the interdependence among shift schedule, productivity rate, calendar duration, and risk registers within each identified what-if scenario has been taken into account. The confidence in achieving each of the what-if scenarios is determined using Monte Carlo simulation and a 3-dimensional joint confidence limit model. Based on the simulation results, the deterministic values of the selected project outcomes and the mean values of the resultant distributions are driven primarily by uncertainty, and the distribution tails represent the impact of materialized risks. Also, the probability of failure for each project outcome is less than the joint probability of failure for multiple outcomes. In the second stage of the methodology, the resultant distribution tails (attained from the previous stage) are explored by primarily assessing the impact of outliers (i.e., Type II risks) on project outcomes. Although outliers are typically considered rare events with extreme impacts, the scale and complexity of megaprojects such as refurbishment of nuclear reactors leads to a more frequent occurrence of such events. The applied methodology stems from the reliability analysis approach used to partially justify soft error within integrated circuits due to the observed commonalities such as scale and complexity. A combination of probability theory, Critical Path Method, and Monte Carlo simulation is used to assess the true probability of occurrence for such events. Based on the simulation results, the outliers should be acknowledged and incorporated in the risk management plan of large-scale and complex ventures such as megaprojects. The proposed methodology is validated via Delphi and sensitivity analysis, and functional demonstration using information from an actual multi-billion dollar nuclear refurbishment project and a unique full-scale mock-up of the reactor’s fuel channels and feeders.