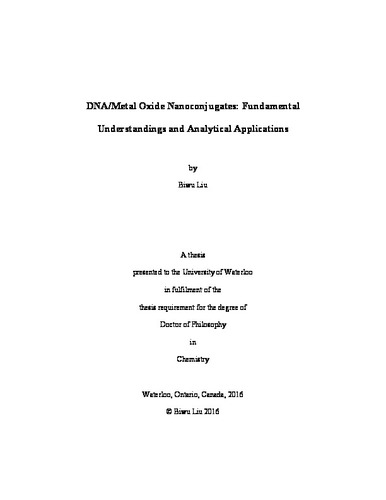 DNA-functionalized nanomaterials have shown versatile applications in biosensor development, biomedical diagnostics, therapy, and catalysis. DNA is attractive for this purpose for its programmable structure, molecular recognition function, and ease of modification. Various nanomaterials, including noble metals, carbons, metal oxides, soft polymeric nanostructures, and metal organic frameworks have been conjugated with DNA. Among them, metal oxide nanoparticles (MONPs) exhibit unique magnetic, catalytic, and surface properties. Most previously reported DNA/MONP conjugates were prepared with the help of surface coating layers or linkers. While such conjugation provides stable hybrid materials, the intrinsic surface properties of MONPs are often masked. The primary focus of this thesis is to interface DNA oligonucleotides with pristine MONPs to provide critical insights into the fundamental understandings at these bio-nano interfaces and to design functional biosensors towards environmentally and biologically important analytes. In Chapter 2 the interaction between indium-doped tin oxide nanoparticles (ITO NPs) and fluorescently labeled single-stranded DNA (ssDNA) is systematically studied. While electrochemical and photochemical biosensors based on ITO for DNA detection have been developed, little is known about the biointerface chemistry. The DNA adsorption and fluorescence quenching capability of ITO NPs is first confirmed. Salt concentration, pH, DNA sequence and length affect DNA adsorption. The adsorption mechanism is found to be through the phosphate backbone using displacement assays. ITO NPs but not In2O3 can discriminate ssDNA and double stranded DNA (dsDNA) based on the difference in their chain flexibility. In Chapter 3, the interaction between fluorescently labeled DNA and iron oxide nanoparticles is investigated. Fe3O4 NPs adsorb DNA via the phosphate backbone and quench the fluorescence. With the strong affinity between arsenate and Fe3O4, a highly sensitive arsenate sensor is demonstrated based on the displacement of fluorescently labeled DNA by arsenate. Arsenate displaces adsorbed DNA to increase fluorescence, allowing the detection of arsenate down to 300 nM. The sensor design represents a new way of using DNA: analyte recognition relying on metal oxide while DNA is used only as a signaling molecule. In Chapter 4, following the work in Chapter 2 and 3, a total of 19 MONPs are screened for their ability to adsorb DNA, quench fluorescence, and release adsorbed DNA in the presence of a few common anions. These MONPs have different fluorescence quenching properties, DNA adsorption affinity, and different sensitivity toward anions probed by DNA desorption. Finally, CeO2, Fe3O4, and ZnO are used to form a sensor array to discriminate phosphate, arsenate, and arsenite from the rest using the linear discriminant analysis method. The study not only provides a solution for anion discrimination using MONPs and DNA but also insights into the interface of metal oxides and DNA. In Chapter 5, a fluorescently labeled DNA is used as a probe to investigate the interaction between a biologically important molecule, H2O2, and a nanozyme, nanoceria. Nanoceria has been previously reported to bind DNA strongly. I demonstrate that the adsorbed DNA can be readily displaced by H2O2, resulting in over 20-fold fluorescence enhancement. The displacement mechanism instead of oxidative DNA cleavage is confirmed by denaturing gel electrophoresis and surface group pKa measurements. This system can sensitively detect H2O2 down to 130 nM. When coupled with glucose oxidase, glucose is detected down to 8.9 µM in buffer. Detection in serum is also achieved with results comparable with that from a commercial glucose meter. With an understanding of the ligand role of H2O2, new applications in rational materials design, sensor development, and drug delivery can be further exploited. In Chapter 6, I demonstrate the feasibility of using DNA in promoting the peroxidase activity of iron oxide nanoparticles. The effect of DNA length, sequence, surface coating are systematically studied. The rate enhancement is more significant with longer DNA. The negatively charged phosphate backbone and bases of DNA can increase the substrate binding, thus facilitating the oxidation reaction in the presence of H2O2. The role of DNA in modulating the peroxidase activity of iron oxide provides insights into the mechanism the nanozymes. Overall, the adsorption mechanism of DNA by various oxides, the controlling of the catalytic activity of oxides, and the related biosensor applications have been extensively studied in this thesis.