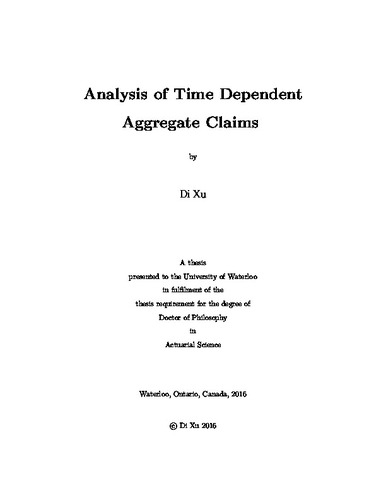 Estimation of aggregate claim amounts is a fundamental task in Actuarial science, based on which risk theory, ruin theory and reinsurance theory can be studied. Properties, including moments, Laplace transforms, and probability functions of aggregate claims have been extensively studied by many scholars under various models (see, e.g., Hogg and Klugman (1984)). The main classical model is the compound Poisson risk model, where the interclaim times are independent of the claim severities. Scholars started to explore this problem by considering more general counting processes, such as mixed Poisson processes (e.g., Willmot (1986)) and renewal processes (e.g., Andersen (1957)). Afterwards, the independence assumptions on multiple risk factors were gradually relaxed. Additionally, the observation times are further randomized to fit the reality better. In this thesis, we propose to analyze the aggregate claims until both randomized and deterministic time horizons by incorporating inflation and payment (reporting) delays into the analysis. Dependence between the claim occurrence times (also interclaim times) and claim severities is further considered. A comprehensive review on the study of the aggregate claims is given in Chapter 1. Chapter 2 introduces the relevant preliminary knowledge on the aggregate models and techniques used in this thesis. Chapter 3 examines the Laplace transforms of the aggregate claims under a nonhomogeneous birth process, which covers Poisson, mixed Poisson and linear contagion model. Furthermore, the claim occurrence times influence the distribution of the claim severities. Under some assumptions on the counting process, the time-dependent aggregate claims are represented as a random sum of independent and identically distributed random variables. The aggregate incurred but not reported (IBNR) claims are studied in Chapter 4 due to their essential role in reserving. A recursive formula is identified for the moments of the total discounted IBNR claims under a generalized renewal risk model where the interclaim times, claim severities and random reporting lags have an arbitrary dependence structure. The probability mass function of the number of IBNR claims is obtained under certain assumptions on the marginal distributions of the interclaim times, claim severities and reporting lags. To address the influence of the economic environment, a Markovian arrival process is introduced in Chapter 5 to analyze the IBNR claim problem. A straightforward representation and a closed-form expression are identified for the moments of the total discounted IBNR claim amount and numbers respectively without adding much difficulty to the analysis. Instead of a deterministic time horizon as considered in Chapters 3, 4 and 5, attention has also been paid to the analysis under a randomized observation time (see, e.g., Stanford et al. (2005) and Ramaswami et al. (2008)). Randomization in the time horizon usually leads to more tractable expressions for given quantities (e.g., Albrecher et al. (2011, 2013)). However, in the case of time-dependent aggregate claims, it only adds extra integration to the expressions of relevant quantities. In this thesis, instead of working with general random time horizons, we work with some specific random time horizons, i.e. two-sided exit time, in Chapter 6. The two-sided exit problem has been the subject matter of risk management analysis to better understand the dynamic of various insurance risk processes. In the two-sided exit setting, the discounted aggregate claims are investigated under a dependent renewal process (also known as dependent Sparre Andersen risk process). Utilizing Laplace transforms, we identify the fundamental solutions to a given integral equation, which will be shown to play a role similar to the scale matrix for spectrally-negative Markov-additive processes (e.g., Kyprianou and Palmowski (2008)). Explicit expressions and recursions are then identified for the two-sided probabilities and the moments of the aggregate claims respectively. Chapter 7 ends the thesis by some concluding remarks and directions for future research.