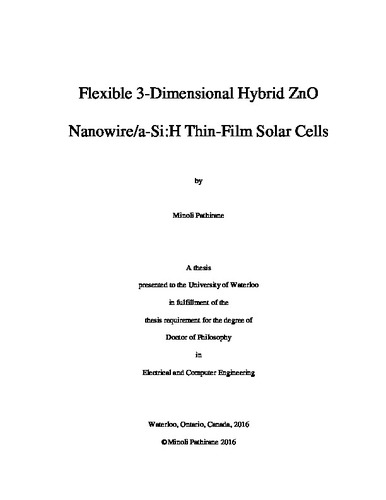 ZnO nanowires were conformally coated with hydrogenated amorphous Si (a-Si:H) p-i-n thin-film to form three-dimensional (3-D) radial-junction (RJ) nanowire solar cell arrays (NWSCs). These NWSCs are a promising architecture for photovoltaic devices due to their enhanced light absorption and carrier extraction capabilities. However, conformally coating thin-films and the top electrode over ZnO nanowires become difficult with decreased periods by using conventional methods. In this thesis, conformal coatings were achieved by increasing the average spacing between NWSCs while effectively moving the NWSCs physically towards each other via substrate-bending to change the spacing between the NWSCs. Randomly positioned NWSCs were fabricated directly on flexible substrates at < 200ºC. 2 µm/200 nm/2×10-8 cm-2 height/diameter/density ZnO nanowires were grown hydrothermally on polyethylene naphthalate substrates using a ZnO nanoparticle seed layer. P-i-n a-Si:H thin-film were subsequently deposited over the ZnO nanowires using plasma-enhanced chemical vapor deposition. Finally, a composite layer, composed of Al-doped ZnO thin-film and Ag nanowires, was coated over the 3-D structures to form flexible, conformal, and transparent top electrodes. A 100% yield of flexible NWSCs about a 3-inch diameter substrate was achieved with highest power conversion efficiencies of 5.5 ± 1%. Mechanically bending the NWSCs concave-up to a radius of curvature of 38 mm decreased the NWSC spacing by 9%, which helped further enhance light absorption by 13% and ∆JSC by 11% from the cells. Geometric and numerical models were used to assess the effective movement of the NWSCs and mechanical strain when the substrate was bent concave-up and concave-down (away from the incoming light). Stress-induced strain due to the mechanical bending was calculated to be ~ 0.1-1%. Furthermore, a polydimethylsiloxane film coated conformally over these 3-D nanostructures produced effective super-hydrophobic surfaces, which can help maintain clean NWSC arrayed top surfaces without degrading the 3-D device performance.