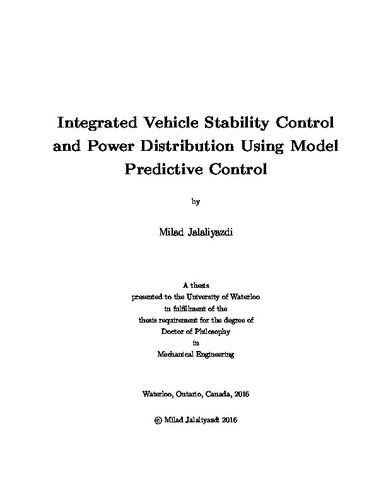 There is a growing need for active safety systems to assist drivers in unfavorable driving conditions. In these conditions, the behavior of the vehicle is different than the linear response during everyday driving. Even experienced drivers usually lose control of the vehicle in such situations and that often results in a car accident. Stability control systems have been developed over the past few decades to assist drivers in keeping the vehicle under control. Most of these control systems are comprised of separate modules, each responsible for one task such as yaw rate tracking, sideslip control, traction control or power distribution. These objectives may be in conflict in some driving situations. In such cases, individual controllers fight over priority and produce conflicting control commands, to the detriment of the vehicle performance. In addition, in most stability control systems, transferring the controller from one vehicle to another with a different driveline and actuator configuration requires significant modifications in the controller and major re-tuning to obtain a similar performance. This is a major disadvantage for auto companies and increases the controller design and tuning costs. In this thesis, an integrated control system has been designed to address vehicle stability, traction control and power distribution objectives at the same time. The proposed controller casts all of these objectives in a single objective function and chooses control actions to optimize this objective function. Therefore, the output of the integrated controller is not altered by another module and the optimality of the solution is not compromised. Furthermore, the designed controller can be easily reconfigured to work with various driveline configurations such as all-wheel drive, front or rear-wheel drive. In addition, it can also work with various actuator configurations such as torque vectoring, differential braking or any combination of them on the front or rear axles. Moving from one configuration to another does not change the stability control performance and major re-tuning can be avoided. The performance of the designed model predictive controller is evaluated in software simulations with a high fidelity model of an electric Equinox vehicle. The stability and wheel slip control performance of the controller is evaluated in various driving and road conditions. In addition, the effect of integrated power distribution is studied. Experimental tests with two different electric vehicles are also carried out to evaluate the real-time performance of the MPC controller. It is observed that the controller is able to maintain vehicle and wheel stability in all of the driving scenarios considered. The power distribution system is able to improve vehicle efficiency by approximately 1.5% and acts in cooperation with the stability control objectives.