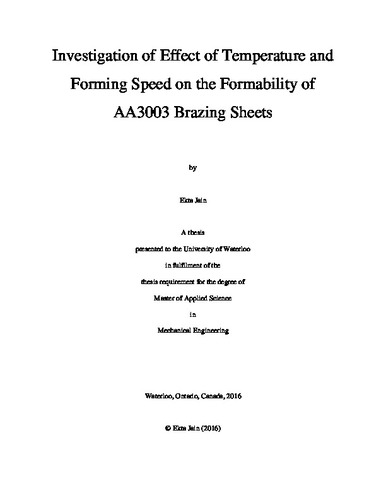 The present work investigates the effect of forming temperature and forming speed on the formability of AA3003 aluminum alloy brazing sheet in three temper conditions (O, H22 and H24) and two different thicknesses (0.2 and 0.5 mm). Limiting Dome Height (LDH) experiments were conducted from which Forming Limit Curves (FLCs) were developed using the “linear best fit time-dependent method” (due to Volk and Hora, 2010) at room temperature (RT), 150 °C, 200 °C and 250 °C and forming speeds of 0.4 and 1.6 mm/s. Limiting dome height (LDH) experiments performed on 0.5 mm O temper AA3003 brazing sheet showed an increase in the biaxial dome height (from 29.3 mm to 38 mm) for an increase in temperature from RT to 250 °C, a 28% increase. For the thinner 0.2 mm material, the corresponding improvement in LDH for the same temperature increase was 30%, 29% and 26% for the O, H22 and H24 tempers, respectively. The measured FLCs were found to decrease with a decrease in sheet thickness and with increases in the initial hardness (temper). The plane strain limit strain (FLC-0 strain) of the O temper materials decreased by 24% at RT and 35% at 250 °C, when the thickness is reduced from 0.5 mm to 0.2 mm. For the 0.2 mm H22 and H24 materials, the RT FLC-0 strains are observed to be 31% and 39% lower than that of 0.2 mm O temper sheet. At 250 °C the respective drop in FLC-0 for the two tempers are 39% and 48%, respectively. The increase in forming speed from 0.4 mm/s to 1.6 mm/s had very little effect on forming limits at RT, but resulted in a 6-9% drop in the FLCs at 250 °C. M-K analyses were used to predict the FLCs. It was found that the M-K model is able to capture the temperature dependent formability behavior for the considered brazing sheets when the forming temperature increased from RT to 250 °C. However, the effect of punch speed is not captured as well and this is thought to be a function of the adopted Voce-based material model.