The Role of Practical Reasoning and Typification in Consumer Analytics Work: An Ethnomethodological Study 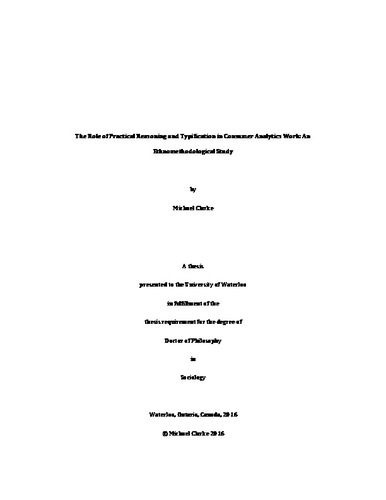 Traditional scholarship views quantitative people-categorization in the workplace—i.e. the use of big data to group consumers and categorize their cultures—as primarily a problem of technical and statistical optimization. By contrast, my thesis emphasizes a very different research dimension: namely, the role that practical reasoning plays as workers organize themselves locally to categorize and apply data-based groups. Drawing on the ethnomethodological understanding of practical reasoning, I focus on the way the locally organized talk accomplishes people-categorization as a self-contained activity. Specifically, I will argue that practical reasoning shapes the way workers, through their talk, combine technology, conversation, and everyday practice to render scenes as reasonable and accountable in their attempt to anticipate, understand, and apply consumer preferences, behaviors, and so on. To do this, analysts should go beyond standard empirical methods to adopt a more radically reflexive stance toward workplace discourse. Next, I will argue that the benefits of adopting such an interpretive methodological stance in this setting are threefold: first, this approach will help market researchers and design professionals rethink how they conduct market segmentation and persona development, two important techniques debated in academia, but used extensively in professional settings to design products, processes, and marketing plans. I will show that “practical” actors, through their locally organized practices, make and find in ordinary taken-for-granted ways “market segmentation” and “persona development” as reasonable ways of assembling the world of people-categorization in the workplace. Second, this approach broadens arguments about the “social life of methods” to include professions outside of the academy that apply statistical methods to big data, and to radically consider our relationship with technology. Furthermore, I will argue that part of understanding practical reasoning in the workplace includes identifying the hold that the unquestioned commitment to expanding technology has on discourse. For the latter, I adopt a radical interpretive perspective in order to reveal the irony of our focus on expanding our human powers through technology. To support my claims, I have divided my argument into four main sections, each one given its own chapter. Chapter 1 reviews how digital advertising workers combine big data about groups of people and their culture with other resources to build to a finished technical product. Chapter 2 outlines how these same workers rely on interpretive methods during the conceptual development of big data people segments. Chapter 3 demonstrates how analysts rely on interpretive methods and background expectancies during the process of accessing, extracting, and analyzing big data about groups of people and their culture. These methods can help professionals achieve a richer understanding of consumer culture, and consequently, can help them make better big-data application decisions throughout the design cycle. Chapter 4 takes a radical interpretive case study format and demonstrates how treating digital advertising worker dialogue as discourse reveals important methods for designers, for workers and for social inquirers. In this final Chapter, I show how a very particular example of a stretch of talk about a piece of technology can be examined as a cultural expression of the desire to expand human powers, and I show how the abstract idea of the desire to expand human powers can be critically addressed as a possibility and actualization in its own right. The analysis in Chapter 4 reveals the seen but unnoticed assumption embedded in the culture concerning the unquestioned commitment to expanding technology, which, it can be argued, has undermined our capacity to talk about purpose or point; instead, the talk takes for granted the assumption that there is only one purpose: expanding our human powers. The principle of expanding our human powers through technology does not just have to be assumed; it can and should be critically engaged. This engagement is accomplished by drawing on radical interpretive approaches to modernity, including Grant (1969), and Arendt (1958).