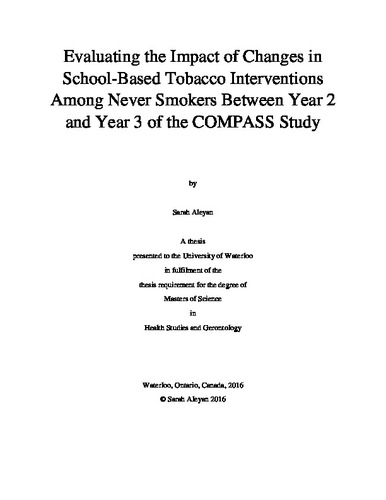 Objective:To examine how changes in school-based tobacco programming within a school influenced smoking susceptibility and smoking initiation outcomes among a sample of grade 9 to 12 students over time. Methods: This study used longitudinal data from Year 2 and Year 3 of the COMPASS study. The study used school-level data from 79 schools within Ontario using the School Policies and Practices (SPP) questionnaire as well as student-level data on 14965 grade 9 to 12 students who were never smoker individuals at baseline (Year 2) using the COMPASS questionnaire (Cq). This study did not examine individuals who were tried smokers at baseline. Binary logistic regression models were used to examine the impact of changes in tobacco programming within a school had on the relative risk of students’ reverting in smoking susceptibility status, becoming susceptible to smoking or initiating smoking behaviour in Year 3. Results: Between Year 2 and Year 3 of the study,22 schools (out of 79) Ontario schools reported implementing a new tobacco intervention in their school. Out of 22 schools, one school intervention had the desired impact of significantly increasing the likelihood of a susceptible never smoker individual at baseline reverting in smoking susceptibility that corresponded with a reduced risk of smoking initiation. One intervention significantly decreased the likelihood of individuals trying smoking, however these promising effects were only observed among the sample of non-susceptible never smoker individuals at baseline. In contrast, two interventions had the undesirable impact of significantly increasing the likelihood of a student initiating smoking behaviour among non-susceptible never smokers at baseline. Conclusion: The evidence presented here indicates that the majority of school-based tobacco prevention programming do not show promise in reducing adolescent smoking susceptibility and initiation among never smokers. Progress in preventing smoking initiation among never smoker youth will require coordinated and comprehensive efforts from various stakeholders. In addition, there is a need for innovative methods to be used in determining which interventions work, for which target audience, and in what context to guide the formulation of tailored and effective programming.

Sarah Aleyan (2016). Evaluating the Impact of Changes in School-Based Tobacco Interventions Among Never Smokers Between Year 2 and Year 3 of the COMPASS Study. UWSpace. http://hdl.handle.net/10012/10575