Dieting and health-related behaviours among adolescent girls: A longitudinal analysis of data from a school-based study 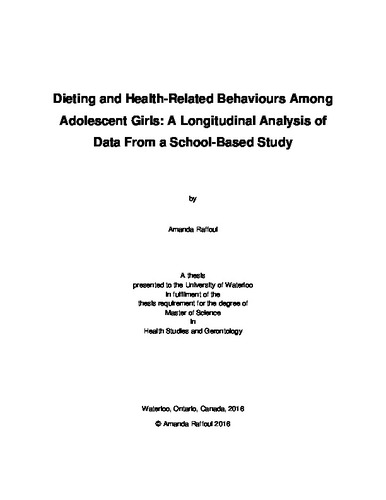 Objective: Dieting to lose weight is extremely common among adolescents, especially girls, and is driven by multiple factors, including individual traits and societal standards regarding body weight and shape. Dieting is associated with poor diet quality, overweight and obesity, and increased risk of eating disorders. Also, according to the amassed cross-sectional and longitudinal research, dieting adolescent girls are more likely to engage in smoking, binge drinking, and breakfast-skipping than non-dieting girls. However, despite literature documenting these bivariate associations, we know little about whether there is a causal link between dieting to lose weight and these behaviours among Canadian adolescent girls. Further, there has been little research considering clustering of multiple risky behaviours with dieting. Methods: Using longitudinal data (2012-2014) from COMPASS, a school-based study conducted in Ontario (N=3,386), we prospectively explored associations between dieting to lose weight and clusters of health-compromising behaviours among adolescent girls. Dieting was defined as an intentional change in behaviour to achieve weight loss. Longitudinal, multilevel logistic regression models were used to investigate the relationship between dieting and each of smoking, binge drinking, breakfast-skipping, and clusters of these behaviours. Results: Over half of girls reported dieting to lose weight (54%) and a similar proportion (61%) self-reported heights and weights corresponding with a healthy BMI (61%). Over 80% of girls classified as dieters at baseline also reported dieting 2 years later. Girls who engaged in dieting at baseline were at a significantly elevated risk of smoking, binge drinking, and breakfast-skipping (OR=1.3 to 1.4) by follow-up than non-dieters. Dieting was also associated with engaging in combinations of these behaviours, with the highest risk for engagement in patterns of binge drinking/breakfast-skipping (OR=1.6) and smoking/binge drinking/breakfast-skipping (OR=1.6). Girls who dieted at baseline were also more likely to engage in a greater number of risky behaviours than non-dieters, regardless of what the actual behaviours were. Conclusion: Dieting is a persistent and pervasive behaviour among adolescent girls, with implications for engagement in other risky behaviours. The theoretical mechanisms underlying the observed clustering are complex, but these findings suggest the need for comprehensive interventions that use a systems lens to consider the array of relevant factors, and their interactions, among this population. Strategies that target a single behaviour may represent missed opportunities to address shared risk factors and may have unintended consequences for other behaviours. These findings are particularly salient given the dominant focus within health promotion on weight loss and maintenance as part of a war on obesity.

Amanda Raffoul (2016). Dieting and health-related behaviours among adolescent girls: A longitudinal analysis of data from a school-based study. UWSpace. http://hdl.handle.net/10012/10570