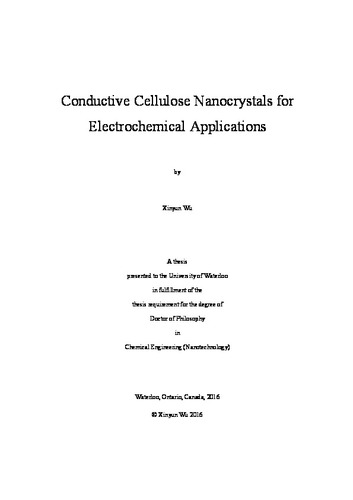 Recognized as the ‘nature’s latest wonder material’, cellulose nanocrystals (CNCs), can be extracted from cellulose, the most abundant biopolymer on earth. This nanomaterial is inherently renewable, nontoxic, sustainable, biodegradable, and has recently been realized at an industrial-scale production at a competitive cost (targeted at $10/kg). Unlike typical nanomaterials, CNC possesses several attractive properties, such as its remarkable colloidal stability in water, which makes facile solution processing possible. It also has outstanding mechanical properties, high aspect ratio, high surface area, and surface chemical reactivity. The material is extremely versatile such that it can be either used as a reinforcing agent, or be chemically/physically modified to produce the desired functionalities needed for different applications. In this work, an innovative transformation of CNCs from an intrinsically insulating material into highly conductive materials was achieved. This was made possible by two different approaches: (1) introducing CNCs with another conductive polymer - polypyrrole (PPy) to form hybrid composites; and (2) carbonizing CNCs into carbon nanorods (CNRs). The prepared conductive CNC was further applied to various electrochemical applications, such as supercapacitor (SP), supported metal catalyst, metal-free catalyst, and electrochemical sensor. In the first approach, two generations of conductive CNCs were developed. Both PPy/CNCs have a core-shell structure with PPy polymerizing in situ on the surface of CNCs forming the coating. CNC served as an ideal nanotemplate to promote an ordered growth of PPy on individual CNC rather than in the bulk solution. CNC also provided significantly improved dispersion stability in water for PPy/CNC composites compared to PPy polymerized under similar condition in the absence of CNCs. Gen 1 PPy/CNC synthesis was conducted by first performing simple chemistry to introduce more negatively charged functional group (i.e. carboxylic groups) to the surface of CNCs. These carboxylic groups provided stronger interaction with PPy layer through hydrogen bonding and dopant effect. In Gen 2, surface property of CNCs was tuned by coating a thin layer of an amphiphilic polymer before PPy polymerization. This coating provided a more favorable substrate for PPy growth compared with Gen 1. Improved synthesis of PPy/CNCs also exhibited an enhanced supercapacitive behavior and more robust cycling stability. In the second approach, conductive CNCs were fabricated through a calcination process up to 1000 oC, where organic polymers of CNCs were decomposed into carbonaceous materials. In this strategy, CNCs were used as carbon precursor and non-sacrificing template for controlling the carbonized nanostructure. To further improve the electrochemical properties of the synthesized carbon nanorods (CNRs), nitrogen (N)-doping was achieved using melamine-formaldehyde resin (MF) as N precursor that was pre-coated on individual CNC nanorods. The highly-crosslinked porous network of MF resin not only introduced the desired N-doping to the carbon framework, but also generated ordered mesoporous structure during pyrolysis. Moreover, it served as a pivotal role in protecting and stabilizing the structural integrity of the rod-shaped CNCs and preserved the fibrous morphology at high enough temperatures for graphitization. The high surface area, abundant mesopores, and N-functionality make N-doped CNRs (NCNRs) promising candidate as electrode material for supercapacitors and metal-free catalyst. The conductive NCNRs were further used as conductive carbon substrates for synthesizing supported metal nanoparticle (MNP) catalyst. However, carbon materials are generally unstable in water due to structural hydrophobicity and they also lack surface functionalities for effective stabilization of MNPs. Therefore, a bio-inspired polydopamine (PDa) polymerization on NCNR surface was performed to prepare NCNRs prior to the metal reduction step. PDa modification introduced strong chelation with metal/metal ions and dramatically increased the dispersibility of the supported metal composites, leading to improved reactant accessibility, higher catalytic activity and utilization efficiency of the metal catalysts. Both Pd and Pt nanoparticles as model metal nanoparticles of 1-2 nm were homogeneously reduced on PDa-NCNRs. The supported metal catalysts showed remarkable catalytic activity when used as catalyst for 4-nitrophenol reduction and oxygen reduction reactions. In addition, the electrode modified with prepared Pt/PDa-NCNRs displayed favorable sensing capability towards non-enzymatic glucose detection with very low overpotential in neutral media. To the best of our knowledge, this work is among the very few pioneering studies that explore the potential of CNCs as highly conductive materials/composites for various electrochemical applications. This thesis unlocks many unexplored applications of CNCs and the findings will provide many sustainable alternatives for the next generation energy storage, electrocatalysts, and electrochemical sensors. It is also expected that this work will contribute to the revival of the forestry industry in Canada by enabling high value-added wood-derived products on the market in the near future.