Urban Design and Planning in Adapting to Climate Change: Advances, Applications, and Challenges 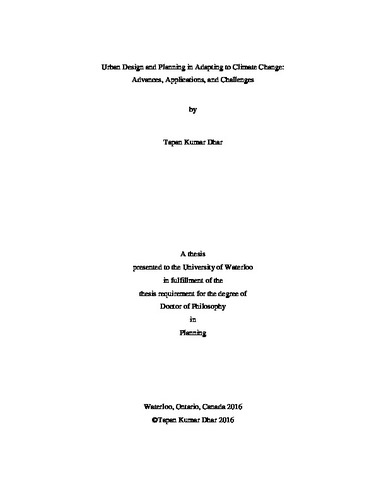 The current sea-level rise predictions are expected to lead to a loss of anywhere between 6000 to 17000 km2 of land area around the globe during the 21st century –a loss that would force around 1.6 to 5.3 million people to migrate while simultaneously impacting another 300 to 650 million people. The rising sea-levels and the associated extreme weather events are expected to significantly impact humans in the 21st century ensuing in significant damage to property, higher demands on energy, disruption of settlements, and a significant loss of both life and natural resources. Small islands and coastal areas are particularly vulnerable to these impacts. Yet, while urban planning and design are often cited as key determinants to reduce climate change impacts, the longitudinal study of this research used 157 peer reviewed articles published in the leading urban planning and design journals revealed that there is nonetheless a dearth of urban planning and design literature that delves into climate change adaptation. Surely, while 2006-2007 represented a turning point after which climate change studies appear more prominently and consistently in urban planning and design literature, however, the majority of these studies address climate change mitigation rather than adaptation. Also, most of these adaptation studies underscore governance, social learning, and vulnerability assessments, while paying little attention to physical planning and urban design interventions. In particular, this body of literature suffers a lack of interdisciplinary linkages, an absence of knowledge transfer, a dearth of participatory research methods, and is straddled with the presence of scale conflict. In doing so, the theoretical framework of this research highlights conceptual similarities –hitherto fragmented– among three domains: urban planning, climate change adaptation, and resilience, such as the similarities between landscape ecological urbanism, the ecosystem-based climate change adaptations (or soft adaptations), and the bounce-forward model of resilience. Simultaneously, this research capitalizes on the expert and experiential knowledge in climate change adaptation whereby, methodologically, it underscores the transactive and the collaborative planning models –through public participation– in order to bridge the fragmented domains of the literature. This research focuses on Negril, a small resort city located on the north-west coast of Jamaica –a country that is considered a Caribbean Small Island Developing State (SIDS). Of particular interest is Long Bay, a seven-mile low-lying strip of beach in Negril where almost all of the area’s tourism activities are concentrated. Similar to other SIDS, a substantial percentage of Jamaica’s GDP is heavily related to beach-tourism and seaside activities, rendering such SIDS particularly vulnerable to climate change, hence, in need of special planning consideration. This research is guided by the following enquiries: What climatic risks are local people and assets exposed to? How can locals adapt to the risks? What measures can be used to assess the current resilience of Negril’s built environment? And what alternatives (locally preferred or expert-driven) could they also consider for future adaptation? In order to address these inquiries, the research methods combined various tactics including a series of design charrettes with various sub-communities, which is a design-focused, hands-on, time-constrained workshop between researchers and local participants with the aim of developing a vision for a sustainable community. A total of 37 local participants partook in two day-long design charrettes. These were conducted simultaneously with a survey questionnaire with 151 respondents, which assessed the local adaptation preferences, as well as 19 in-depth interviews with planners and policy-makers involved in various aspects of urban planning and design in Jamaica. Additionally, a GPS survey documented 19 transverse sections (west to east) along Long Bay so as to model the local elevation profile and thus rank the vulnerable areas prone to sea-level rise. Moreover, the methods included personal observations and transect walks of the study area that yielded analyses of architectural and urban design typologies as well as information through casual interactions with local communities. Lastly, a combination of primary and secondary sources provided the necessary data for the study of Negril’s urban morphology. The findings reveal that Negril’s adaptation planning and policies seem to be goal-oriented and rely heavily on large scale engineering interventions (i.e. hard adaptations) while mostly excluding the local knowledge and the local ecosystems. Additionally, the failure to enforce planning regulations (e.g. controlling coastal set-backs) and the lack of a long-term vision that integrates adaptation and sustainable development have together accelerated Long Bay’s vulnerability. Since the scope for managing retreat is limited in many coastal strips like Negril, whose Long Bay is further limited by the Great Morass that runs parallel to the coastline, the accommodative adaptations that are flexible and reversible and that help boost urban resilience offer a better option than protective ones. The findings reveal that coastal areas in SIDS must adopt an integrated planning approach that incorporates short- and long-term planning strategies. They also reveal that hard adaptation strategies should be adopted only when the soft ones that are based on local preferences, technologies, or knowledge are deemed ineffective or inappropriate. In addition, this dissertation’s findings highlight the inherent potential of ecological design, green infrastructure, and morphological design as essential tools for guiding urban forms toward incremental change that parallels the pace of climate change. This dissertation therefore recommends a paradigm shift toward uncertainty-oriented urban planning and design where adaptations would be perceived as an inherent strategy that is informed by interdisciplinary knowledge and institutional collaboration in order to enhance resilience in a sustainable way. In other words, successful adaptation responses also succeed in achieving carbon neutral, environmentally sensitive, and low-impact development and so capitalize on other benefits along with the adaptation actions. Accordingly, adaptation becomes a process that integrates sustainable development and nature-human systems but one that fundamentally integrates interdisciplinary scholarship.