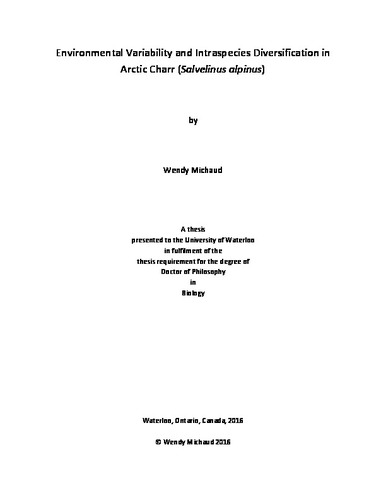 Arctic charr (Salvelinus alpinus) exhibit what is arguably the greatest observed range of phenotypic and ecological diversity within a single vertebrate species. The patterns of adaptive diversity that have developed among populations over evolutionary timescales have been well studied in this species. However, much less is known about the patterns of diversification occurring within populations over contemporary timescales. To better understand the mechanisms involved in the processes of diversification and speciation, this thesis investigates the relationship between environmental variability and phenotypic diversity of Arctic charr over different spatial and temporal scales. To examine the relationship between environmental variability and phenotypic diversity over contemporary time scales, we tested the prediction that shifts in the growth patterns of wild Arctic charr would coincide with temperature fluctuations over a 29-year period. A significant portion of the variation in size-at-age among cohorts of Arctic charr was explained by the cumulative lifetime temperatures, but temperature had mixed effects on growth observed within a single growing season. These changes in cohort growth patterns with temperature demonstrated that environmental fluctuations can have cumulative effects on growth dynamics over an individual’s lifetime. However, the observed changes in growth were better explained by the combined coincident changes in species community dynamics, Arctic charr behavioral patterns, and exploitation rates and practices in the Northwest Atlantic region than by the direct effects of temperature fluctuations alone. Phenotypic diversity over a small spatial scale was examined in the context of a polymorphic population of Arctic charr in a high-latitude lake. An unbiased, Bayesian analysis indicated the size-at-age data collected from Lake Hazen was best described by three discrete clusters of individuals. Life history, diet, and morphological characteristics observed for two of these clusters were consistent with previous descriptions of a cannibalistic and a benthivorous morph. The third cluster represented an early-maturing group that attained adult body sizes smaller than those reported for the previously identified forms. Although there are alternative explanations for the occurrence of distinct size-at-age groups within a fish population, polymorphism is the most consistent explanation for the combination of differences observed [iv] in life history (growth and age-at-maturity), trophic ecology (diet), and morphology among the three groups of Arctic charr identified here. The unusual patterns of diversification observed within this population highlight some of the holes in our broader understanding of the mechanisms of diversification in Arctic charr and other species. The effect of spatial variation in environmental characteristics on intrapopulation diversity was directly examined by testing the prediction that intraspecific competition and ecological opportunity promote morphological diversity within populations of Arctic charr. The relative importance of morphological variation to inter-individual differences in diet was also examined, by testing the prediction that the covariation between diet and morphological variation was greater in populations experiencing less interspecific competition and greater ecological opportunity. The patterns of morphological and diet variation observed in the eleven populations of Arctic charr examined here did not support the predictions tested, though the broader conclusions that can be drawn from this study are limited by the relatively small samples sizes available for analysis. This chapter is best viewed as a pilot project to developing a larger study to test these predictions, as it revealed a suite of potentially interactive effects on the extent of ecological and phenotypic variation within populations of Arctic charr. Phenotypic diversity in Arctic charr and other northern fish species is typically linked with ecological diversity, which is increasingly being quantified using stable isotope data. The final data chapter included in this thesis is a methods-based study meant to compliment the use of stable isotopes as a tool for quantifying diet diversity within and among populations of Arctic charr. Specifically, this chapter tests whether the effects of ecological factors on the differences in δ13C and δ15N values between muscle and liver tissues were large enough to affect the biological interpretation of isotope data when reconstructing temporal diet patterns. Our results demonstrated that life history, diet specialization, reproductive status and gender had significant effects on the difference in stable isotope values between tissues. These factors appear to affect δ13C(M-L) and δ15N(M-L) values indirectly, due to their physiological impacts on metabolism and tissue composition. Most of the ecological factor effects observed here were not large enough to cause misinterpretation when examining major changes in diet, but could confound studies concerned with more subtle changes in omnivory.