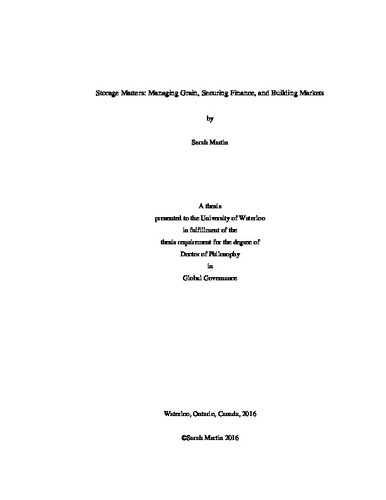 This dissertation analyzes the nexus of agriculture and finance, specifically the mediating role of grain storage. How grain markets are organized and governed is foundational to food security. Hundreds of millions of metric tonnes of grain are traded and moved around the world, and hundreds of billions of dollars are invested in grain commodities via global commodity exchanges. During the late 20th century, agricultural commodity exchanges (ACEs) usurped other marketing models such as state marketing boards, and now play an increasingly influential role in global agricultural commodities. The development of ACEs and changes in grain storage over the twentieth century had implications for how financial actors could or could not access grain as a financial asset. To understand grain storage in relation to finance, I examine the governance of storage by developing a political history of storage through the three processes of stabilization – ideational, regulatory and physical. The thesis is guided by a question: How does the examination of twentieth century US grain storage stabilization – the ideas, regulations and physical infrastructures – help us to understand the financialization of agriculture? To answer this question, I draw from international political economy (IPE) scholars and actor-network theory (ANT) to show how the stabilization of grain requires an assemblage of regulations, technologies and economic ideas that make up the politics of grain storage, and how a close examination of grain-storage governance helps to explain the financialization of agricultural commodities. Financialization of agricultural commodities is the work of assembling and turning a bushel of corn, or any other agricultural good – primarily grain – into a financial asset stream. This definition highlights the role that grain storage plays in commodity speculation, and encompasses the mundane practices of collecting and managing amassed grain in containers. This dissertation shows how ideas, regulations, and industrial projects to stabilize and store grain for collateral contribute to the emergence of ACEs as a model of global grain marketing. By looking beyond corner offices, commodity exchanges and other institutions, the theoretical framework brings non-human storage actors into view by drawing attention to the assemblages of grain bins, fumigants, dryers, documents and regulations that attempt to stabilize unruly grains, and to leverage stored grain for credit and asset streams. The research shows a model of agricultural finance that is reliant on grain-storage governance, a constellation of mid-century economic ideas, agro-chemical technologies, and state regulation, and how they are applied to twenty-first century market “problems” in new frontier sites. The research has applications to contemporary global financial inclusion projects that aim to build new agricultural markets and connect small producers to global markets.