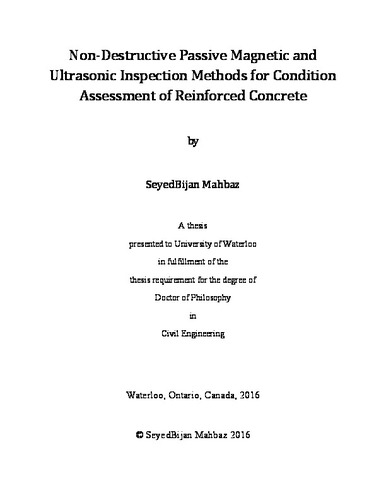 Sustainability, reliability, and safety of complex industrial infrastructure are crucial worldwide issues. Long-term sustainable life quality, services and economic growth provided by modern life is dependent on the quality of the civil infrastructure. Highways, bridges, water networks, waste treatment facilities, and energy supplies are examples of vital civil infrastructure. Substantial investment is necessary for developing and maintaining these complex systems, which affect all parts of our modern life. Corrosion is a key problem now pursuing the life-span of infrastructures and its effects are visible in most infrastructural systems. This thesis describes two complementary quantitative non-destructive testing methods for corrosion assessment of reinforced concrete structures. One based on the magnetic properties of the medium and the second one based on the acoustic properties of the medium. The first testing method use a novel passive magnetic developed for corrosion assessment of rebar within concrete structures. A prototype of a magnetic inspection device was designed and built in the NDT lab at the University of Waterloo, using magneto-inductive sensors. The prototype can scan reinforcement by moving it on the concrete surface to assess corrosion state without damaging the structure. This method is passive; meaning that there is no electrical current passing through the rebar. Different corroded rebars were scanned with the new device. Using signal processing methods, raw (not processed data) magnetic data were analyzed and results show that the scanning device and analysis method have potential for industrial application. The complete calibration of the prototype will be performed as a continuation of this research. By using the developed prototype, three different types of samples were tested. First tests were performed on a rebar with three holes at different locations and positions (top, bottom, and center). Experimental tests were done at two different locations in the lab. At each location, tests were repeated 10 times and averaged to account for local variability in the magnetic field. The maximum standard deviations of experimental results for tests set at Location 1 and Location 2 are 13.6% and 21.4%, respectively. Numerical simulations were also performed for this experimental test data. Using signal processing techniques, hole locations were detected using this passive magnetic method. Also, different patterns were observed for each hole. This experimental test program was done as prove of concept. The second set of tests was done on six rebars with different corrosion levels (metal loss). Penetration depth for the prototype and its ability to distinguish corroded bar from sound bar were tested first. Generally, increasing thickness of concrete (cover) decreases the detectability. However, the scanning prototype was able to detect corrosion for a concrete cover of 11 cm. Wavelet energy analysis was used as a signal processing method for analyzing experimental test data. Two trends were extracted in order to predict the percentage of metal loss in rebar by using the wavelet energy analysis. Although coefficient of correlation was 0.67 and 0.62 for X and Z direction respectively, two equations were developed and can be used as a general indicator for general metal loss prediction. Minimum and maximum level of detected corrosion was %4.7 and %14.3 respectively with ± %1 error. The last set of tests using the magnetometer device was done on three different rebars, which had local corrosion spots. These tests were done using a second version of the scanning prototype. In this version two parallel sensors were used to cover more area. A rotary encoder sensor was added to wheel in order to take the positioning and a memory card board was added to record raw data. The maximum standard deviations for each test were below 1.1%, considered to be an excellent result. Continuous wavelet transform was used to extract features from the raw data. The technique not only detected corrosion, but some inferences could be made about the type of corrosion as well. For the second testing methodology, ultrasonic surface waves were used as a complementary method to detect corrosion de-bonding in rebars. Reinforcement de-bonding from concrete is a major consequence of corrosion. A high frequency transducer (1MHz) and a laser vibrometer device were used to capture displacements at the end of rebar specimens. Surface wave analysis and numerical simulations have been done to detect reinforcement de-bonding. Results show that the peak-to-peak amplitude was in the range up to 4.7 times larger for a de-bonded bar compared to a perfectly bonded bar, because of leaking energy from rebar to the concrete in a perfectly bonded sample compare to de-bonded one. Also, the peak to peak amplitude was 6.2 times more for the de-bonded rebar compared to the perfectly bonded rebar. These differences were clear in their Fourier transform results as well. This thesis describes the development of a novel passive magnetic method and a new approach using ultrasonic waves to detect corrosion of rebars. A new prototype was designed and constructed and its final calibration is under development. Although each method measures different physic approaches, there are some quantified results from each to show the percentage of corrosion. Therefore, data fusion of the passive magnetic method with an ultrasonic method can increase the accuracy of corrosion detection as these methods are perfected and applied in the field.