The Lifecycle of a Whiteboard Photo: Post-meeting Usage of Whiteboard Content Captured with Mobile Devices 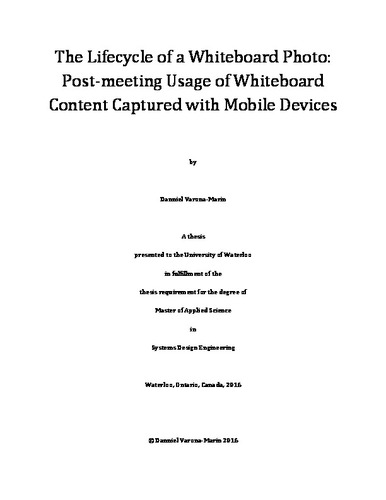 The traditional dry-erase whiteboard is a ubiquitous tool in the workplace, particularly in meeting spaces where they are a key collaboration tool. Although research on whiteboard use and the development of whiteboard systems have been a staple in the Human-Computer Interaction (HCI) literature, there is a lack of how whiteboard content is used to direct actions outside the meeting. In today’s mobile-centric world, knowledge workers capture whiteboard content after a meeting by taking photos of them with mobile devices such as cellphones. This thesis empirically investigated post-meeting practices with whiteboard photos to explore how these practices might be better supported by technology. In particular, this thesis investigated the main post-meeting activities that whiteboard photos support, how people value whiteboard photos, and how they manage them. Nineteen knowledge workers from a variety of professions, companies, and industries across North America who were regular users of whiteboards were interviewed using a semi-structured protocol. A Thematic Analysis of the data revealed that whiteboard photos were primarily used to create superseding documents and were sometimes used as evidence of agreement. Whiteboard photos were used mostly in the short-term, and their value was transient. Also, an analysis of the minute detailed actions that interviewees reported taking with one or two recent whiteboard photos revealed that the typical lifecycle of those whiteboard photos involved a seven-stage lifecycle. Moreover, a memory recall task with six of the interviewees about previous meetings where a whiteboard was used revealed that general characteristics of those meetings were well remembered while characteristics about the whiteboard content were not well remembered. The findings suggested a set of unmet design needs for the development of improved mobile-centric whiteboard capture systems. The suggested design implications include the need for a mobile application that supports quick capture and the effortless transfer of whiteboard photos to productivity-oriented devices, and the need for a desktop application that supports the extraction of whiteboard content to aid users in creating superseding documents.