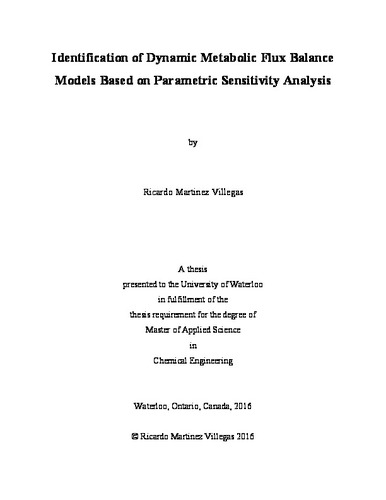 A dynamic mathematical model that involves a set of physicochemical parameters can describe a dynamic system. Parametric sensitivity analysis studies the effect of changes in these parameters on model outputs of interest. If a system is operated within a region of high sensitivity any small change in the parameter values drastically affect the output. Hence, it is essential to be able to predict this sensitivity when designing, operating or optimizing a system based on the model. Dynamical biological models that describe gene regulation, signalling, and metabolic networks are strongly dependent on a large number of parameters. Most of these models are highly nonlinear and involve a high-dimensional state space. Conventional parametric sensitivity analysis that examines the effect of each parameter independently at one specific moment is generally inaccurate since it ignores correlations between parameters. Thus, it is very important to account for correlations when conducting a parametric sensitivity analysis. Model parameters are never known accurately and consequently they are typically described by a range of values. Some parameters may be measured directly but even for such case they will exhibit variability due to noise, e.g. a flow rate that is measured by a noisy flow meter. The variability in values of model parameters that cannot be measured directly arises from two main sources: i- noise in data and ii- process disturbances that translate directly or indirectly into changes in the parameters. In the presence of measurement noise, the identification of model parameters from data will result in model parameter values that are known within bounds with different levels of confidence. Also, process disturbances may directly affect the value of a parameter, e.g. changes in initial conditions of a metabolite concentration in a batch culture, or indirectly, e.g. changes in oxygen transfer due to changes in aeration rates. This thesis focuses on the identification of model parameters for biochemical systems. Models describing such systems are based on the biochemical reactions occurring within an organism that are used to produce or consume essential components to grow, reproduce, preserve cell structures, and respond to environmental changes. This group of reactions is collectively referred to as a metabolic network. Dynamic Flux Balance Analysis, a particular modeling method, which is the focus of the current work, can be used to study microbial metabolic networks. This type of mathematical model can simulate the metabolism of an individual cell by describing the flux distribution inside a cellular network. The approach is based on maximizing a biological based objective such as growth rate or production of ATP subject to constraints on the rate of change of certain metabolites. Several other approaches have been developed in turn to simulate the responses of the cells to different stimulus. Nevertheless, Dynamic Flux Balance Analysis compared to other approaches is advantageous in terms of the relatively smaller number of parameters that have to be calibrated to fit the data thus resulting in lower sensitivity to noise and requiring smaller data sets for calibration. In view of its advantages, this thesis focuses on this particular modeling approach, which is becoming increasingly popular in the field of biotechnology and systems biology disciplines. The research to be presented will focus on the robust identification of dynamic metabolic flux models based on parametric sensitivity analysis. The particular case study that is chosen to illustrate the proposed method is Diauxic growth in Escherichia coli in a batch culture. This approach intends to show how to identify the model parameters of the dynamic model based on a parametric sensitivity analysis that explicitly accounts for correlations in the data. The sensitivity is quantified by a parameter sensitivity spectrum. Then, the parameters are ranked based on this analysis to assess whether a subset of the parameters can be eliminated from further analysis. Finally, identification of the remaining significant parameters is based on the maximization of an overall parametric sensitivity measure subject to set based constraints that are derived from the available data. The parametric sensitivity method is global in the sense that it examines the simultaneous variation of all the model’s outputs instead of focusing on outputs variables one at a time.