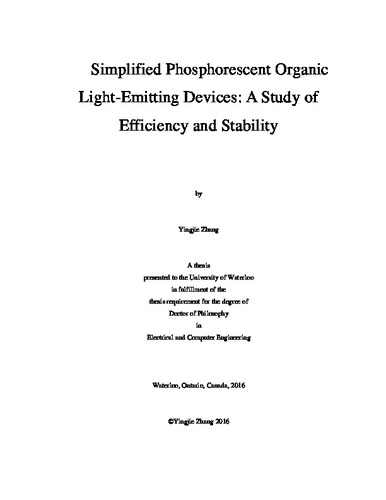 Organic light-emitting devices (OLEDs), compared to their inorganic counterparts, have potentially lower fabrication costs, lighter weight and better mechanical flexibility. Since its invention almost three decades ago, OLED technology has attracted tremendous interest, and has now produced a multi-billion-dollar industry. Currently, the two major applications of OLEDs are display panels and solid state lighting. As OLED development has progressed, its efficiency and stability have improved dramatically. However, these improvements come with the cost of increasing complexity in device structure. Consequently, the initial promise that OLEDs can provide a significant advantage in fabrication cost has unfortunately diminished. Recently, a device utilizing a simplified phosphorescent OLED, or PHOLED, structure with only three organic layers sparked interest in the field. Despite its simpler structure, this simplified PHOLED exhibits high efficiency. The origin of this high efficiency is, however, unclear. Considering that the device does not utilize blocking layers, it is uncertain if device efficiency can be further optimized. Moreover, simplified PHOLEDs have much lower stability than that of the conventional devices. This work aims to be the first scientific investigation directed towards simplified PHOLEDs, with the goal of understanding the underlying processes that govern efficiency and stability of these devices, and then to utilize this knowledge to try to further improve device performance. Investigations of the efficiency behavior of these devices show that charge balance in simplified PHOLEDs is not optimal. Particularly, the devices are generally hole-rich, and that the leakage of electrons to the counter electrode also presents a major mechanism that results in efficiency loss. By using hole transport layers (HTLs) that can also block electrons, device efficiency is found to increase by 25%. Results also show that by using a rougher ITO, light trapped in the ITO/organic wave-guided mode can be efficiently extracted, and a light outcoupling enhancement as high as 40% is achieved. Furthermore, it is found that the ITO thickness can also influence light outcoupling by 40%. These results demonstrate the significant efficiency benefits of using ITO with optimal thicknesses and higher roughness in OLEDs. Investigations of the factors governing device stability show that the exciton-induced degradation of the ITO/organic interface plays an important role in limiting the lifetime of simplified PHOLEDs. It is found that the lack of electron blocking layers in these devices allows electrons to leak from the emission layers and recombine with holes to form excitons near the ITO/organic interface. Furthermore, it is shown that introducing an electron blocking HTL can increase device lifetime by one order of magnitude. These results also show that the interactions between excitons and positive polarons in the host lead to host aggregation followed by the formation of exciton quenchers within. It is found that the rate of host aggregation limits the lifetime of PHOLEDs, and is also influenced by the guest material and its concentration. The findings explain why PHOLEDs utilizing different guest materials but otherwise identical material systems can have significantly different lifetimes and provide an answer to a long-lasting question in the field. Finally, it is found that reducing the exciton and polaron densities within the emission layer can further improve the lifetime of simplified PHOLEDs by one order of magnitude.