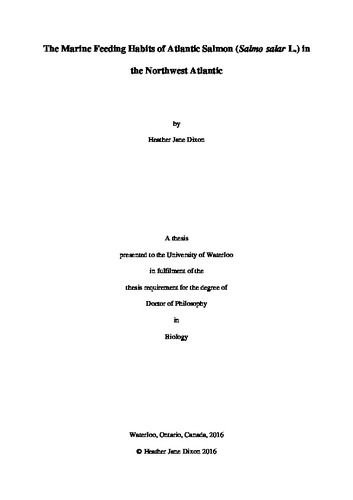 Investigations on marine feeding of Atlantic salmon (Salmo salar L.) in the Northwest Atlantic are rather limited in comparison with studies carried out in the Northeast Atlantic. Climate induced changes to food webs in marine feeding areas for Atlantic salmon have been noted in recent years, along with an increase in mortality and decrease in recruitment and growth, despite a cessation in most ocean fishing activities. Since foraging may be hampering salmon survival, it is important that this knowledge gap be addressed. Accordingly, Atlantic salmon were sampled at three communities on the West Greenland coast across three years, 2009-2011, and 15 rivers spanning a broad geographic range in Atlantic Canada in 2008-2010. Conventional gut content analyses were combined with stable isotope methods to assess spatial and temporal differences in Atlantic salmon marine feeding. An investigation of differences between juvenile feeding in freshwater and adult feeding in the marine environment indicated that Atlantic salmon undergo a dramatic change in feeding as they migrate. Smolts show much larger δ13C variability, due to the benthic-pelagic coupling which occurs in the freshwater ecosystem, while adults foraging in the marine environment demonstrate much smaller δ13C variability due to a high reliance on pelagically sourced carbon, as demonstrated by a mixing model. There was an overall decrease in the variance of δ15N (and therefore degree of omnivory) between smolts and returning adults, although this was not consistent across all rivers. Capelin (Mallotus villosus) was found to dominate diet at Nuuk and Qaqortoq, while boreoatlantic armhook squid (Gonatus fabricii) was the dominant prey at Sisimiut. Hyperiid amphipods (Themisto spp.) and sand lance (Ammodytes spp.) were also important. Significant differences were found among communities for gut contents analysis (dietary overlap and diversity) and stable isotope analysis, while fewer differences were evident temporally. Dietary differences were also evident across larger spatial and temporal scales, with a lack of overlap in diets of Atlantic salmon from the Northeast Atlantic and the emergence of boreoatlantic armhook squid as an important prey item over the last 40 years. Atlantic salmon diets are frequently anchored on one or two prey items, on which they appear to specialise, but will diversify widely to consume other available prey, confirming that this species is an opportunistic, generalist predator. An assessment of the reliance of Atlantic salmon on inshore prey resources and its associated seasonal variation demonstrated significant differences in inshore resource use, condition factor and fish size over time. On average, Atlantic salmon relied on inshore resources for 38 % of their diet (with a range of 0-84 %). Although differences between inshore and offshore feeding were small, the resulting implications of size and condition for migration and spawning success suggest important biological consequences of feeding habitat choice. The variation in inshore resource mirrors hydrographic variation and associated changes in the prey base related to glacial input, frontal zones between inshore and offshore water masses and nutrient input from run-off. The lack of significant differences in trophic niche or omnivory when relying on either inshore or offshore prey resources is suggestive of a similar number of prey species utilised. An investigation into stable isotope values for the marine growth zone of scales and its constituent growth zones (1st summer, 1st winter, 2nd summer) from non-maturing 1SW Atlantic salmon found significant differences among these zones. A mathematical model assuming isometric growth was used to correct for the biasing effect of later overplating of scales, facilitating calculation of the “pure” stable isotope values for the different marine growth zones. Appropriate accounting for the differences between measured and “pure” values will assist in minimising the ecological inference associated with the use of stable isotope analysis. Given the similarity between the measured and “pure” whole marine growth zone values, the measured whole marine growth zone can be used as a proxy for average marine feeding, while the commonly used 2nd summer growth zone was found not to be representative of earlier marine feeding. This thesis is the first to combine SIA and GCA to examine Atlantic salmon diet in the Northwest Atlantic, and has demonstrated that Atlantic salmon in the marine environment are pelagically feeding opportunists, with preferences towards several specific prey species and the use of inshore resources while feeding along the West Greenland coast. Additionally, as discussed above, this thesis has expanded the understanding of the use of scales in SIA, and identified a number of potential areas for future research.