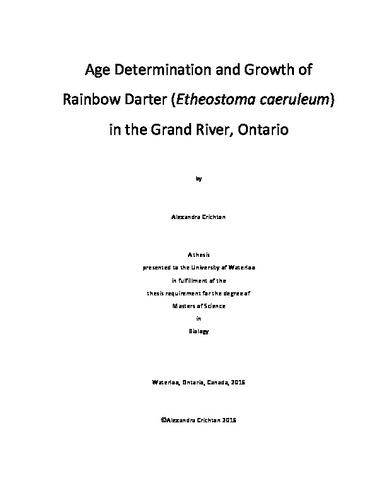 The accurate determination and validation of age is an important tool in fisheries management. Age profiles allow insight into population dynamics, mortality rates and growth rates, which are important factors in many biomonitoring programs, including the Canadian Environmental Effects Monitoring (EEM) program. Many monitoring studies in the Grand River, Ontario have focused on the impact of municipal wastewater effluent (MWWE) on fish health. Much of the research has been directed at understanding the effects of MWWE on responses across levels of biological organization. The rainbow darter (Etheostoma caeruleum), a small-bodied, benthic fish found throughout the Grand River watershed has been used as a sentinel species in many of these studies. Although changes in somatic indices (e.g. condition, gonad somatic indices) have been included in previous studies, methods to age rainbow darters would provide additional tools to explore impacts at the population level. The objective of the current study was to develop a method to accurately age rainbow darter, validated by use of marginal increment analysis (MIA) and edge analysis (EA) and to characterize growth of male and female rainbow darter at a relatively unimpacted site on the Grand River. Rainbow darter were collected from the Grand River at West Montrose on a monthly basis (May 2014 - June 2015). Size (length, weight) and gonad/liver weight were recorded, and left and right sagittal otoliths were collected. Length-frequency distributions were constructed for the darter population in July and October 2014 to assess population structures. Darters spawn in the Grand River in late April-early May and young-of-the-year (YOY) darters reached a catchable size, using backpack electro-shockers, by July. A distinct YOY cohort was apparent in the July length-frequency distribution; YOY ranged in length from 1.2–2.5 cm. By October the length-frequency distribution demonstrated that the YOY had started to merge into the other age classes. Direct age determination (using sagittal otoliths) of a subset of the October collections supports that YOY fish are no longer a distinct cohort on the length-frequency distribution, and have assimilated into the rest of the population by this time of year. Direct age determination of fish at this time of the year is therefore necessary to separate age classes. Examination of rainbow darter otoliths collected monthly was used to validate the use of this structure for accurate age estimation. MIA showed that one annulus was formed per year on sagittal otoliths, and that summer (opaque) growth zone formation began in early summer. EA was able to identify the timing of both summer growth zone and annulus (translucent zone) formation. Summer growth zone formed as early as April, with all fish exhibiting growth by July. Annulus formation was noted in some fish in September, and in all fish by November. Size-at-age data resulting from the October length-frequency subsampled fish showed differences between male and female rainbow darter. Young fish, both male and female, grow quickly in the first two years (ages 0+ and 1+) and exhibit similar mean length and weight-at-age. Beginning at age 2+ and in each older age group, male rainbow darter become significantly longer and heavier at age compared to females. Additionally, male fish continued to increase significantly in weight each year, with no apparent decrease in weight gain, whereas females did not gain weight significantly after the age of 2+. Estimated von Bertalanffy growth curves for male and female length-at-age relationships further emphasize the difference in male and female growth beginning at age 2+. Furthermore, this model predicted male maximum length to be greater than that of female fish (male: Linf=7.42; female: Linf=6.48). Liver and gonadosomatic indices collected each month indicate increased energy allocation into liver and gonad development in female fish for reproductive purposes, which may account for the difference in male and female size (length/weight) in older age cohorts. This study has contributed to our understanding of the aging and growth of a small-bodied fish species that is widespread in North America. An accurate and reliable method to age rainbow darter was validated and the knowledge necessary for the addition of growth into biomonitoring studies was established for using rainbow darter as a sentinel species. The ability to accurately estimate age in rainbow darter provides the opportunity to assess growth as an additional population level endpoint in ongoing studies in the Grand River and in other watersheds that are experiencing environmental change.