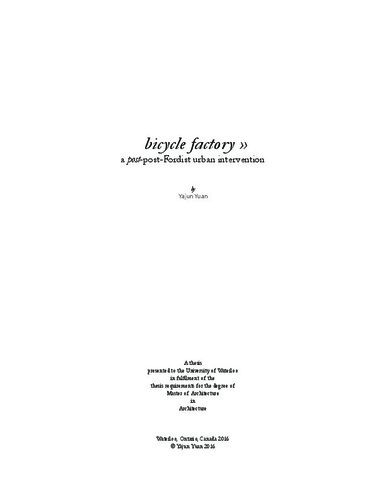 Cities were once filled with bicycles and factories—urban typologies now regarded as anachronistic elements of the landscape, as their relationship to the built environment evolved throughout the Industrial Revolution, Fordism, and post-Fordism. The 20-century city was largely shaped by the automobile, which quickly displaced the human-powered mode of transportation. Meanwhile, spaces of production once spatially situated within their local markets were pushed further and further from the urban core, until offshored entirely to the developing world. These transformations have also left scars in the cities of advance economies, as 19th-century railways and other industrial remnants now impede on the human scale of urban life. Today, after decades of aggressive industrialization, environmental sustainability has reached a point of global crisis. The bicycle and the factory, as artifacts that have endured the test of time, are summoned to help foster a sustainable, contemporary city. The thesis seeks to re-establish their relevance in the built environment, by reintegrating light manufacturing activity back into the urban fabric, and proliferating the bicycle as a self-mobility machine for everyday transportation. An ideal ‘post-post-Fordist’ society is thus proposed, defined as [good] Fordism + [good] post-Fordism + counter-culture trends + novel ideas. The post-post-Fordist city is envisioned as a dense, heterogeneous construct, while its post-post-Fordist urban intervention is presented as a bicycle factory in the city of Toronto. The architectural design acts as a catalyst to proliferate the bicycle and its infrastructure across the urban landscape, in the same way Ford’s mass production of automobiles sculpted the modern city. It also spatially reconnects producers, workers, and consumers within a more cyclical, local economy. As a microcosm of the post-post-Fordist metropolis, the building is a complex, interweaving, layered assembly, consisting of a hybrid typology of factory, pedestrian & cycling bridge, urban park, velodrome, and bike park. The bridges physically re-connect portions of Toronto’s urban fabric torn apart by railways, while the architecture figuratively bridges between the project’s urban scale (cycling masterplan), and its object scale (commuter bicycle commodity). The factory’s transparent manufacturing process and democratic organization of labour are also composite systems, consisting of Fordist mass production and post-Fordist mass customization, while employing skilled and semi-skilled labour as a worker & consumer co-operative. The intervention embodies the bicycle’s construction, movement, and social qualities in its tectonics, while enabling cycling infrastructure to permeate into the building. In this way, the proposal endeavours to lift us out of the industrial exploitation of the last century, while providing a relief from contemporary society’s over-saturation of digital technology, to return the machine to its rightful place as an intuitive extension of our bodies.