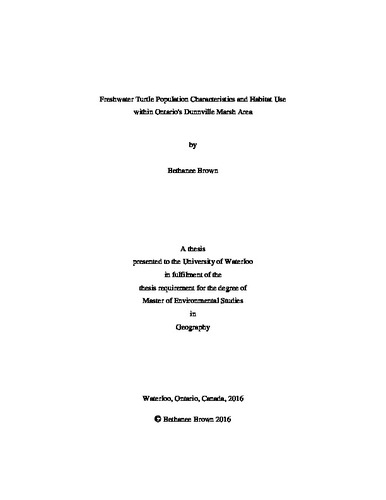 Habitat conservation and restoration can be effective solutions to habitat loss, fragmentation, and degradation that impacts freshwater turtle species. Although some studies have been conducted in Ontario regarding freshwater turtle habitat use, few studies have examined habitat use within and adjacent to an ecologically restored riparian area. The purpose of this study was to determine freshwater turtle population characteristics and areas of micro and macrohabitat use located within and adjacent to an ecologically restored marshland in Southern Ontario. Mark and recapture of freshwater turtles took place with the use of baited hoop nets and basking traps. Twelve turtles were radio-tracked throughout the active season, which included 11 painted turtles (Chrysemys picta) and one Blanding's turtle (Emydoidea blandingii). Microhabitat variables were measured and recorded at relocation points, and macrohabitats were mapped with location points in ArcMap 10.3.1. The most abundant species was painted turtles, followed by snapping turtles (Chelydra serpentina), and Blanding's turtles. The overall male to female ratio for adult painted turtles was 2.6:1, and the adult to juvenile size-class ratio was 3:1. The adult to juvenile size-class ratio for snapping turtles was 1:1. Only one female juvenile Blanding's was captured throughout the field season. The mean daily distance travelled by turtles was 25.9 meters for females and 13.3 meters for males. A repeated measures ANOVA test revealed that the sex, as well as month (season) significantly influenced daily distances travelled. Average home ranges were 5.9 hectares for females, and 2.7 hectares for males. A one-way ANOVA test indicated there was no significant influence of sex on home range size. Painted turtles spent the most time in Mixed Shallow Aquatic habitats, while the Blanding's turtle spent the most time in Organic Shallow Marsh habitats. Individuals did not appear to use the interior marsh or the ecologically restored areas due to a difference in microhabitat variables compared to areas of habitat use. Further restoration of the marsh to include macro and microhabitats variables that accommodate the needs of freshwater turtles could encourage individuals to occupy the interior areas of the restored marsh.