The Troubled Life and Loves of Lady Anne Lennard: Illegitimacy, sexuality, and mistressdom at the court of Charles II, 1690-1720 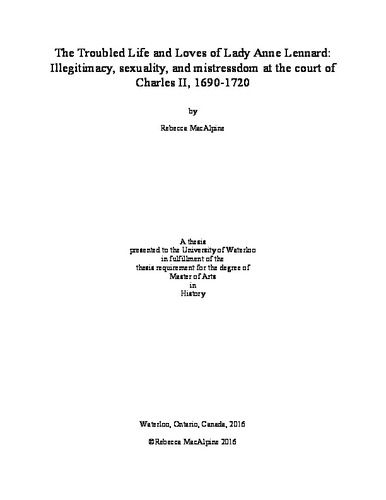 Despite her infamy, the life of Lady Anne Lennard, formally styled the Countess of Sussex, has never received an in-depth examination. As the natural daughter of King Charles II of England born via his mistress Barbara Palmer, formally styled the Duchess of Cleveland, Lady Anne provides an avenue to examine illegitimate children, paternity, sexuality, marriage, dowry, economic security, and mistresses in early modern England. Through the analysis of three trials, filed in the Chancery court and the House of Lords, between 1690 and 1720, this thesis demonstrates that despite the possession, practice and performance of illicit sexual behaviours by Barbara Palmer her status as an elite woman allowed her to maintain access to material and symbolic capital, and manufacture the same resources for her daughter, Lady Anne. This highlights that despite previous notions of the rigidity of female reputation in the early modern period, women in the upper echelons of society maintained their social agency in instances where they contravened social convention.