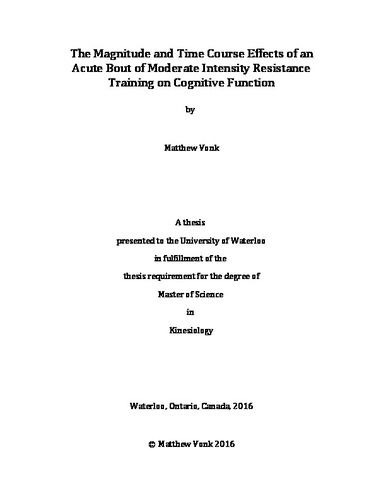 Resistance training (RT) is a common form of physical activity that forms a core part of physical activity recommendations. RT has well-documented benefits to metabolic and musculoskeletal health. Emerging research also suggests that RT, when performed over a period of time, is associated with improvements in cognitive function. More recently, studies have examined the acute effect of RT on cognitive function, as characterized by behavioural and electroencephalography (EEG) measures. Studies to date have predominantly demonstrated acute benefits to behavioural measures of executive function after RT in older, untrained populations. Only one study also used concurrent EEG to examine underlying cortical changes in a young adult population. Results from this study suggest that an acute moderate intensity RT session promotes faster responses and increased P300 (P3) amplitude. The purpose of this thesis was to specifically examine the effects of acute moderate intensity RT on response inhibition among young adults, when compared to non-exercise rest and loadless (LL) movement controls. The first objective was to determine if acute RT altered cortical processing, as measured by P3 amplitude and latency during a modified Stroop task. The second objective was to investigate whether acute RT influences behavioural measures of response time and accuracy during a modified Stroop task. The final objective was to examine the time course of effects up to 40min after the intervention. Twenty-two physically active young adults performed three sessions: rest, LL activity (simulated RT), and moderate intensity RT over a 5-week period. The rest session was always performed first and the LL and RT sessions were then performed in randomized order. A modified Stroop task was performed before the intervention and again 10, 20, 30, and 40min post-intervention with concurrent EEG. Outcomes (Stroop task response time and accuracy, P3 amplitude and latency) were analyzed with mixed effects linear regression models. Changes in cognitive function, as characterized by behavioural and EEG measures, were similar after RT, LL, and rest for most measures. P3 amplitudes increased over time, for the rest session only (p<0.0041). There were no differences between RT and LL activity. The reason for the lack of effects, in contrast to most prior studies, is unclear. However, it is possible that the lack of effects may be due to the simpler response inhibition task, the shorter rest during the RT session, or the lack of randomization of the rest session. Future research should further investigate the relative effects of RT, LL movement, and rest on cognitive function, with a fully randomized design. Studies should also investigate underlying mechanisms and relative differences between these conditions to better understand the influence of movement and exertion on cognitive function.