Modeling and Optimization of Biomass Supply Chain for Energy, Chemicals and Materials Productions 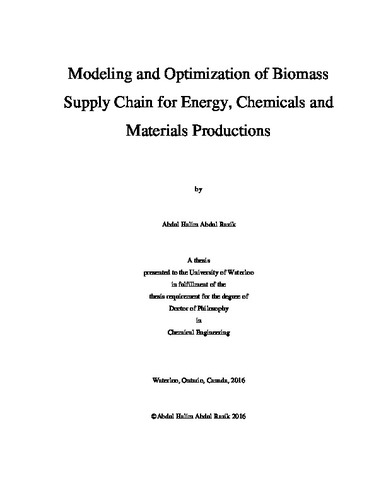 In the growing concerns towards global environmental qualities and sustainable feedstocks supplies, scientific and technological efforts were intensified to utilize alternative renewable resources. In this regard, biomass appeared to be one of the potential feedstocks because it is generally carbon neutral and essentially renewable. Furthermore, biomass is virtually found in every part of the world in abundance and could provide socio-economic benefits. However, if it is not managed properly, biomass will be less competitive due to several issues that are associated with its supply chain. Typical biomass supply chain has a series of activities such as growing, harvesting, transporting, aggregating, and conversion which systematic and efficient flows of materials from the fields to the users are highly important. Biomass has competing uses, different kinds and origins which are potentially exploitable, poor geographic distributions for retrieving and transporting, and variations in physical and chemical properties. It is difficult to make informed decision for any biomass utilization project without having an optimal supply chain. This research intended to solve those issues by modeling and optimizing biomass supply chains for manufacturing energy, chemicals, and materials based on their respective processing routes. The aim was not only to focus on energy production from biomass but also to include chemicals and materials because of several factors such as an emerging cost competitive energy resource such as shale gas, highly volatile energy prices, and customer’s preparedness and acceptances. Furthermore, it also could leverage biomass plantations on the producers’ sides. The biomass supply chain model has considered annual profitability of producing products as the performance indicator. It was derived from revenues of selling the products subtracted all the associated costs such as biomass cost, transportation cost, production cost, and emission treatment costs from transportation and production activities. It summed up simultaneously all the profitable processing options that have existed in the superstructure to yield the optimal value, while a single ownership was assumed for the whole supply chain’s facilities. Three optimization models have been developed and implemented in GAMS (General Algebraic Modeling System). The first one was the supply chain’s optimization for Omtec Inc., located in Southwestern Ontario. It was a research collaboration between Omtec and the Department of Chemical Engineering, University of Waterloo, under the Natural Sciences and Engineering Research Council of Canada’s Engage funding. Currently, this company produces bio-filler and briquette from wheat straw. They were planning for business expansion and to diversify the existing products’ portfolios for future investment. It involved utilizations of biomass sources other than wheat straw and productions of products other than bio-filler and briquette. A superstructure that has assisted in the model’s formulation provided alternatives in the biomass processing routes which in turn aimed for profit maximization. Optimal results indicated that an annual profit of $ 22,618,673 was expected to be achieved, and this value was contributed mainly by the sales of bio-filler, bio-ethanol and by-products from the milling plant. The developed model has offered flexibilities in biomass resources utilization and technological uses for Omtec Inc. Since the model only considered biomass cost, transportation cost and production cost, it did not evaluate environmental performance in the supply chain. The second optimization model was for the supply chain of Malaysian palm oil empty fruit bunches for multi-products productions. As one of the main palm oil producer in the world, Malaysia within its biomass initiatives and strategic plans has promoted the local biomass source utilizations for value-added products. The developed model has considered environmental performance in the supply chain by introducing emissions from transportation and production activities as one of decision variables. The superstructure showed processing alternatives for converting the biomass source into intermediates and products, transportation networks between processing facilities, and options for product’s direct sale or for further refinements. Particularly, option for directly selling the produced product versus further refinement was relevant due to the economic uncertainties. With the available parameters, the optimal profit was found to be $ 713,642,269 per year. This economic bonanza was seemed ideal and have lack of optimal selections for processing routes and transportation modes. The third and the last model has extended the second model by incorporating integer variables for important decisions related to the best processing routes and transportation modes in the supply chain. With numerous alternatives available, selecting best processing route for producing a product was imperative because of several factors associated with that such as product’s competitiveness, viability and status of technology, environmental impacts, and so on. The optimal decisions about transportation amounts and modes have directly influenced the overall economic profitability as well as biomass accessibility and mobility. At a planning stage, questions might arise whether to use truck, train, barge or pipeline for transporting biomass and derived products from processing facilities to the desired destinations in the most economical way. With that in mind, the model has considered all of these dilemmas and provided useful information. The previous superstructure has been modified to include states of produced products whether they were solid, liquid or gases. Assignments for the transportation modes were done according to this modification. With the given parameters and constraints, the optimal annual profit was $1,561,106,613 per year. Since majority of utilization projects involving biomass are still under research and development stages and there are difficulties to consolidate real data, approximations of models’ parameters could not be avoided. The obtained optimal values were subjected to the qualities and availabilities of these approximated parameters. However, sensitivity analysis were performed by varying selected parameters and the effects to the objective functions were recorded. All in all, it was a strong hope that this research could solve typical issues related to the biomass supply chain and would integrate well with the efforts to simulate the biomass utilization process individually.