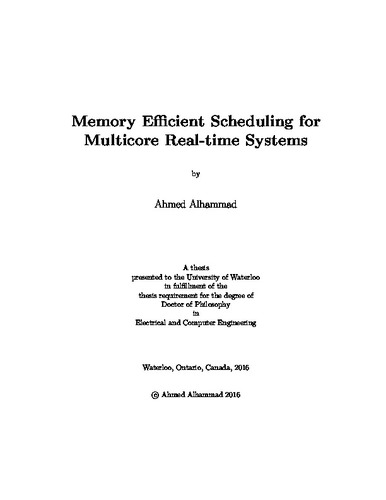 Modern real-time systems are becoming increasingly complex and requiring significant computational power to meet their demands. Since the increase in uniprocessor speed has slowed down in the last decade, multicore processors are now the preferred way to supply the increased performance demand of real-time systems. A significant amount of work in the real-time community has focused on scheduling solutions for multicore processors for both sequential and parallel real-time tasks. Even though such solutions are able to provide strict timing guarantees on the overall response time of real-time tasks, they rely on the assumption that the worst-case execution time (WCET) of each individual task is known. However, physical shared resources such as main memory and I/O are heavily employed in multicore processors. These resources are limited and therefore subject to contention. In fact, the execution time of one task when run in parallel with other tasks is significantly larger than the execution time of the same task when run in isolation. In addition, the presence of shared resources increases the timing unpredictability due to the conflicts generated by multiple cores. As a result, the adoption of multicore processors for real-time systems is dependent upon solving such sources of unpredictability. In this dissertation, we investigate memory bus contention. In particular, two main problems are associated with memory contention: (1) unpredictable behavior and (2) hindrance of performance. We show how to mitigate these two problems through scheduling. Scheduling is an attractive tool that can be easily integrated into the system without the need for hardware modifications. We adopt an execution model that exposes memory as a resource to the scheduling algorithm. Thus, the theory of real-time multiprocessor scheduling, that has seen significant advances in recent years, can be utilized to schedule both processor cores and memory. Since the real-time workload on multicore processors can be modeled as sequential or parallel tasks, we also study parallel task scheduling by taking memory time into account.