Matchings and Covers in Hypergraphs 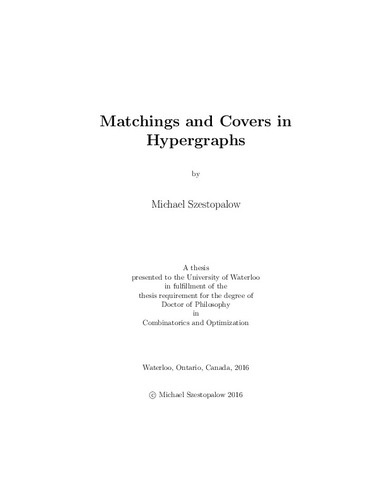 In this thesis, we study three variations of matching and covering problems in hypergraphs. The first is motivated by an old conjecture of Ryser which says that if $\mcH$ is an $r$-uniform, $r$-partite hypergraph which does not have a matching of size at least $\nu +1$, then $\mcH$ has a vertex cover of size at most $(r-1)\nu$. In particular, we examine the extremal hypergraphs for the $r=3$ case of Ryser's conjecture. In 2014, Haxell, Narins, and Szab{\'{o}} characterized these $3$-uniform, tripartite hypergraphs. Their work relies heavily on topological arguments and seems difficult to generalize. We reprove their characterization and significantly reduce the topological dependencies. Our proof starts by using topology to show that every $3$-uniform, tripartite hypergraph has two matchings which interact with each other in a very restricted way. However, the remainder of the proof uses only elementary methods to show how the extremal hypergraphs are built around these two matchings. Our second motivational pillar is Tuza's conjecture from 1984. For graphs $G$ and $H$, let $\nu_{H}(G)$ denote the size of a maximum collection of pairwise edge-disjoint copies of $H$ in $G$ and let $\tau_{H}(G)$ denote the minimum size of a set of edges which meets every copy of $H$ in $G$. The conjecture is relevant to the case where $H=K_{3}$ and says that $\tau_{\triangledown}(G) \leq 2\nu_{\triangledown}(G)$ for every graph $G$. In 1998, Haxell and Kohayakawa proved that if $G$ is a tripartite graph, then $\tau_{\triangledown}(G) \leq 1.956\nu_{\triangledown}(G)$. We use similar techniques plus a topological result to show that $\tau_{\triangledown}(G) \leq 1.87\nu_{\triangledown}(G)$ for all tripartite graphs $G$. We also examine a special subclass of tripartite graphs and use a simple network flow argument to prove that $\tau_{\triangledown}(H) = \nu_{\triangledown}(H)$ for all such graphs $H$. We then look at the problem of packing and covering edge-disjoint $K_{4}$'s. Yuster proved that if a graph $G$ does not have a fractional packing of $K_{4}$'s of size bigger than $\nu_{\boxtimes}^{*}(G)$, then $\tau_{\boxtimes}(G) \leq 4\nu_{\boxtimes}^{*}(G)$. We give a complementary result to Yuster's for $K_{4}$'s: We show that every graph $G$ has a fractional cover of $K_{4}$'s of size at most $\frac{9}{2}\nu_{\boxtimes}(G)$. We also provide upper bounds on $\tau_{\boxtimes}$ for several classes of graphs. Our final topic is a discussion of fractional stable matchings. Tan proved that every graph has a $\frac{1}{2}$-integral stable matching. We consider hypergraphs. There is a natural notion of fractional stable matching for hypergraphs, and we may ask whether an analogous result exists for this setting. We show this is not the case: Using a construction of Chung, F{\"{u}}redi, Garey, and Graham, we prove that, for all $n \in \mbN$, there is a $3$-uniform hypergraph with preferences with a fractional stable matching that is unique and has denominators of size at least $n$.