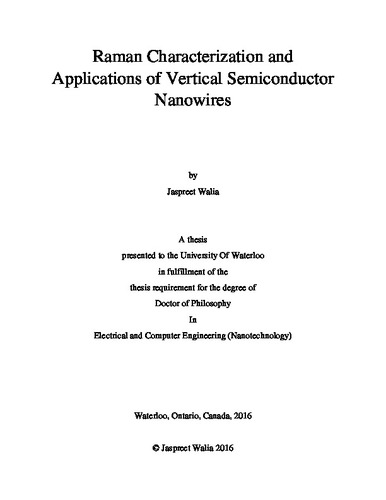 Vertically oriented nanowires are gaining a considerable amount of attention for a wide variety of applications ranging from lasers to solar cells. Raman spectroscopy has also been developed into a powerful tool which has been used to effectively measure the physical properties of nanowires including crystalline quality, and thermal properties. However, Raman spectroscopy has not widely been applied to study vertically oriented nanowires. In this thesis, it is shown that Raman spectra from vertically oriented nanowires can be used to understand the crystalline quality of the samples, and can also be used to identify the diameter for which the HE11 mode is resonantly excited for an incident wavelength of light. In addition to this, Raman spectroscopy was used to estimate the refractive index of the amorphous silicon nanowire samples. Secondly, enhanced photo-thermal conversion in vertically oriented nanowires is demonstrated. The temperatures are measured using Raman spectroscopy. It is shown that by exciting the HE11 mode that temperature increases of 300 K can be achieved for an irradiance of only 10 W/mm2. Furthermore it is shown that when higher irradiances are used, that GaAs nanowires begin to decompose, resulting in a shell morphology. The concept of photo-thermal heating due to waveguiding was also used to examine how the crystallization process of a-Si nanowires is affected. It was found that depending on the diameter of the nanowire, the crystallization is process is limited. Initial excitation of the HE11 mode does not lead to total crystallization due to a rapid loss in the resonance condition. Lastly, structural colours were observed from nanowire arrays. The colours are used to demonstrate a diffraction based method for measuring nanowire spacing, a linear refractive index sensor, and photo-thermal printing.