Estimating PM2.5 in the Beijing-Tianjin-Hebei Region Using MODIS AOD Products from 2014 to 2015 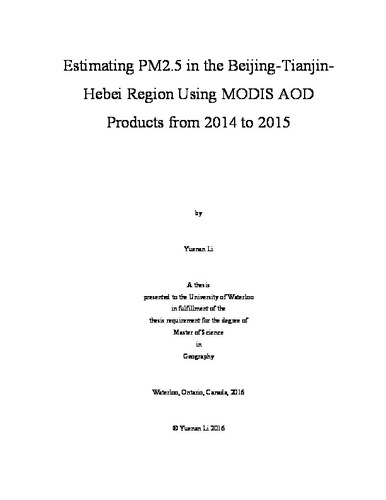 Fine particulate matter with a diameter less than 2.5 μm (PM2.5) has harmful impacts on regional climate, economic development and public health. The high PM2.5 concentrations in China’s urban areas are mainly caused by combustion of coal and gasoline, industrial pollution and unknown/uncertain sources. The Beijing-Tianjin-Hebei (BTH) region with a land area of 218,000 km2, which contains 13 cities, is the biggest urbanized region in northern China. The huge population (110 million, 8% of the China’s population), local heavy industries and vehicle emissions have resulted in severe air pollution. To monitor ground-level PM2.5 concentration, the Chinese government spent significant expense in building more than 1500 in-situ stations (79 stations in the BTH region). However, most of these stations are situated in urban areas. Besides, each station can only represent a limited area around that station, which leaves the vast rural land out of monitoring. In this situation, geographic information system and remote sensing can be used as complementary tools. Traditional models have used 10 km MODIS Aerosol Optical Depth (AOD) product and proved the statistical relationship between AOD and PM2.5. In 2014, the 3 km MODIS AOD product was released which made PM2.5 estimation with a higher resolution became possible. This study presents an estimation on PM2.5 distribution in the BTH region from September 2014 to August 2015 by combining the MODIS satellite data, ground measurements of PM2.5, and meteorological documents. Firstly, the 3 km and 10 km MODIS AOD products were validated with AErosol RObotic NETwork (AERONET AOD. Then the MLR and GWR models were employed respectively to estimate PM2.5 concentrations using ground measurements and two MODIS AOD products, meteorological datasets and land use information. Seasonal and regional analyses were also followed to make a comparative study on strengths and weaknesses between the 3 km and 10 km AOD products. Finally, the number of non-accidental deaths attributed to the long-term exposure of PM2.5 in the BTH region was estimated spatially. The results demonstrated that the 10 km AOD product provided results with a higher accuracy and greater coverage, although the 3 km AOD product could provide more information about the spatial variations of PM2.5 estimation. Additionally, compared with the global regression, the geographically weighed regression model was able to improve the estimation results. Finally, it was estimated that more than 30,000 people died in the BTH region during the study period attributed to the excessive PM2.5 concentrations.