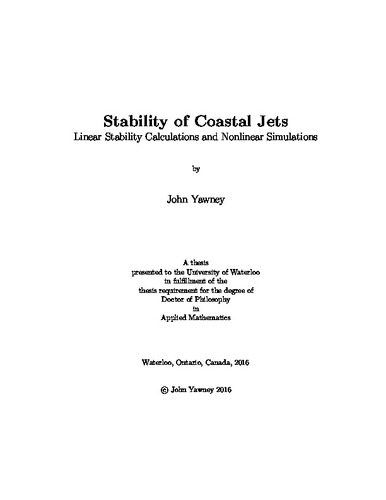 In this thesis, a new numerical ocean model, Tempest, has been developed for application to simple process studies of large-scale ocean dynamics. This model allows for hydrostatic, non-hydrostatic, quasi-hydrostatic, and quasi-geostrophic model options to be employed and is a rigid-lid, fully three-dimensional model that allows for two-dimensionally varying bottom topography using a terrain-following coordinate transformation. To assess the accuracy and validity of this model a number of preliminary test cases are considered. These consist of a complex linear advection test, various convection studies including those defined over one- and two-dimensionally varying bottom topography, and a series of ocean gyre tests. Next, the stability characteristics of a barotropic and a surface intensified baroclinic coastal jet are analyzed. Barotropic jets are characterized by significant horizontal shear and can give rise to both barotropic and baroclinic modes. Furthermore, barotropic jets are often more greatly impacted by variations in the bottom topography compared to surface-intensified baroclinic jets. On the other hand, baroclinic jets have both strong horizontal and vertical shear and are representative of more commonly observed physical jets in the ocean. That being said, baroclinic jets are often more difficult to study numerically due in part to the variations in the isopycnals from the definition of the background jet structure. To gain insights into the growth and structure of the instabilities that can arise from the perturbation of these jets both linear stability calculations and nonlinear simulations are performed. The linear stability calculations allow us to consider a wide range of parameters efficiently. The effects of prograde and retrograde topography as well as varying degrees of stratification are considered. Guided by the results from the linear stability calculations, a set of nonlinear simulations are chosen. Using both the hydrostatic and quasi-geostrophic model options, a comparison between the two sets of results are made and non-QG effects are observed. As well, the results from the linear stability calculations are validated.