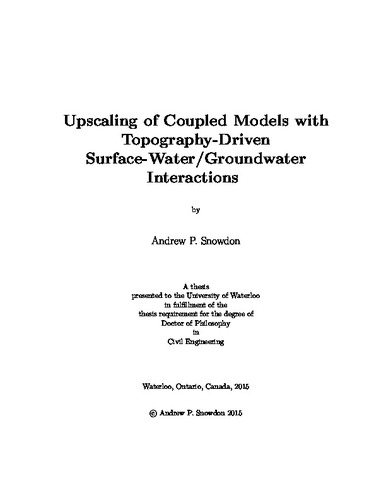 Since the 1950s, groundwater and surface water models have evolved to better represent complex hydrological and hydrogeological systems. Part of this evolution has been the coupling of surface and subsurface models to properly simulate the transfer of mass between the two systems. While generally robust for simulating phenomena at smaller scales, existing coupled and fully-integrated models are problematic for larger-scale operational use. Fine-scale models are often computationally prohibitive due to the vast amounts of computational data required and because surface and subsurface models are often not discretized the same spatially. Conversely, faster coarse-scale models incorrectly simulate groundwater-surface water exchange fluxes because they neglect the details of subgrid water exchange. The primary goal of this thesis is to develop and test a regional-scale coupled model that may be used in an operational context. The model has two unique features: (1) it uses a novel upscaling formulation for handling groundwater/surface water exchange fluxes and (2) it can operate using unstructured grids (e.g., surface water basin boundaries) as the basic level of discretization for surface water and groundwater systems. The proposed upscaling approach is developed using fine-resolution topography-driven groundwater flow models to generate relationships between vertical water fluxes and average groundwater head. The relationships are used, in coarse-scale models, to represent groundwater-surface water exchange fluxes. These are then implemented in a new groundwater model that is coupled with the surface water model Raven. Comparisons with Modflow and HydroGeosphere are conducted to determine the effectiveness of this new approach.