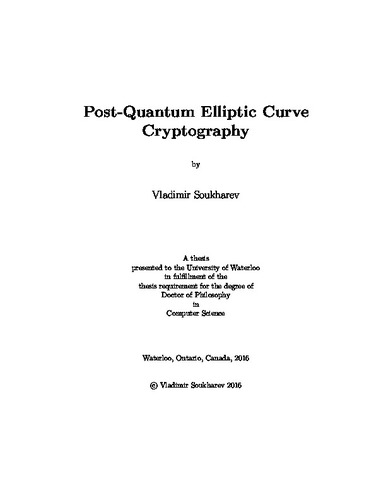 We propose and develop new schemes for post-quantum cryptography based on isogenies over elliptic curves. First we show that ordinary elliptic curves are have less than exponential security against quantum computers. These results were used as the motivation for De Feo, Jao and Pl\^ut's construction of public key cryptosystems using supersingular elliptic curve isogenies. We extend their construction and show that isogenies between supersingular elliptic curves can be used as the underlying hard mathematical problem for other quantum-resistant schemes. For our second contribution, we propose is an undeniable signature scheme based on elliptic curve isogenies. We prove its security under certain reasonable number-theoretic computational assumptions for which no efficient quantum algorithms are known. This proposal represents only the second known quantum-resistant undeniable signature scheme, and the first such scheme secure under a number-theoretic complexity assumption. Finally, we also propose a security model for evaluating the security of authenticated encryption schemes in the post-quantum setting. Our model is based on a combination of the classical Bellare-Namprempre security model for authenticated encryption together with modifications from Boneh and Zhandry to handle message authentication against quantum adversaries. We give a generic construction based on Bellare-Namprempre for producing an authenticated encryption protocol from any quantum-resistant symmetric-key encryption scheme together with any digital signature scheme or MAC admitting any classical security reduction to a quantum-computationally hard problem. We apply the results and show how we can explicitly construct authenticated encryption schemes based on isogenies.