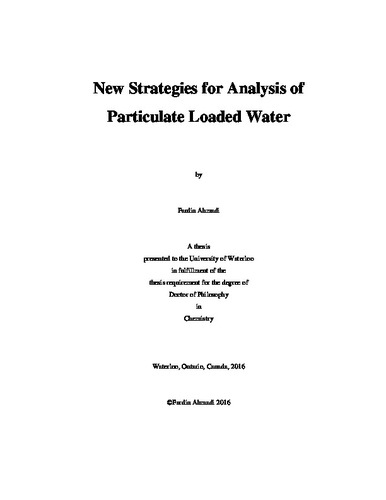 This thesis describes the application of thin film solid phase microextraction (TF-SPME) for monitoring of time weighted average (TWA) concentrations and for investigating partitioning of UV filters and biocides in aquatic environments. The occurrence, distribution, fate, and transport of ingredients of personal care products in the aquatic environment are a subject of public concern, as their impact on human life and aquatic organisms has yet to be fully understood. As such, simple and reliable analytical techniques are necessary to monitor TWA concentrations and investigate the partitioning of UV filters and biocides on sediment and humic substances in aquatic environments. In the currently presented work, time weighted average (TWA) passive sampling with TF-SPME and liquid chromatography tandem mass spectrometry (LC-MS/MS) was used for the collection, identification, and quantification of UV filters and biocides in aquatic environment. First, a reliable flow-through aqueous standard generation (ASG) system was constructed to provide a steady state concentration, and also address issues related to in-vial preparation of aqueous standards of hydrophobic compounds, such as partial precipitation, loss due to analyte adhesion to surfaces, low solubility in water, and limited sample volumes. The developed ASG offers many advantages over traditional standard preparation methods, including convenient, inexpensive, solvent-free, and long term generation of analytes in the concentration ranges relevant to environmental values. The observed changes in the concentrations of target analytes were less than 20% within a 2 month span. The developed system was used subsequently for development of a TWA sampler, and for binding investigations using TF-SPME. Two types of TF-SPME passive samplers, iv including a thin film-retracted device using a hydrophilic lipophilic balance coating (HLB) sorbent and an open bed configuration with octadecyl silica-based (C18) particles as extraction phases, were evaluated in the ASG. Laboratory calibration of the retracted device using the HLB coating showed a linear uptake of up to 70 days. In open bed configuration, the one-calibrant kinetic calibration technique was successfully applied by loading Benzophenone3-d5 as calibrant on the C18 coating to quantify all hydrophobic compounds. The experimental results showed that one-calibrant kinetic calibration can be used for determination of classes of compounds where deuterated counterparts are either not available or expensive. The developed passive samplers were deployed in wastewater-dominated reaches of the Grand River (Kitchener, ON) to verify their feasibility for determination of TWA concentrations in on-site applications. Field trials results indicated that these devices are suitable for long- and short-term monitoring of compounds varying in polarity, such as UV filters and biocide compounds in water. In addition, partitioning of UV filters and biocides on humic acid was investigated in the developed ASG. ASG enables the provision of large volumes of sample, an essential criteria when performing negligible depletion extraction by TF-SPME. Extraction time profiles of the analytes in humic acid-free and humic acid solutions were investigated, and matrix effects were observed for highly bonded analytes. The binding percentages and distribution coefficients (KDOC) between the studied analytes and Sigma Aldrich humic acid were determined when the free and total concentrations of analytes as well as the concentration of dissolved organic carbon (DOC) were known. TF-SPME and liquid-liquid extraction were used respectively for measuring the free and total concentrations of analytes in the humic acid v solution. Furthermore, sediment-water partition coefficient Kd were also investigated in the batch mode for the analytes. The linear isotherm model was observed over a small concentration range and the analyte concentrations in sediment phase. TF-SPME using HLB and C18 sorbent was used for measuring CW-SPME instead of CW-LLE. The data showed that the hydrophobic analytes have substantial association to the bed sediment and DOC in sediment porewater. This has several consequences on determination of fate, transport, and ecotoxicological effects by hydrophobic analytes. However, the low partitioning coefficients of hydrophilic analytes on sediment and DOC imply that these compounds are freely dissolved predominantly, which can have an adverse consequence on the quality of drinking water.