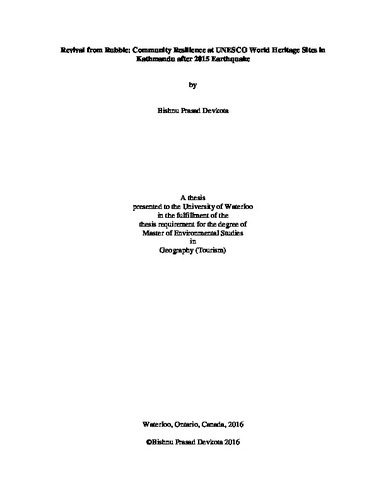 The April 25, 2015 “Gorkha Earthquake” wrecked Nepal with unprecedented disaster that turned into rubble many of the ancient monuments and historical buildings protected under UNESCO World Heritage in Kathmandu valley (UNESCO, n.d.). Communities living in their vicinity had very deep relation with them and promptly responded for their care. Despite volumes of studies on disaster, studies that focus on the role of sense of place in enhancing community resilience is greatly lacking (Cox & Perry, 2011). The purpose of this qualitative case study was to explore perceptions of community resilience among the local communities living around the heritage sites of Kathmandu based on their sense of place after the 2015 earthquake. Kathmandu’s three Durbar squares (ancient palace courtyards)—Hanumandhoka, Patan, and Bhaktapur-- were selected as the sites of study because these sites and the monuments therein represent indigenous Newar communities’ ancient cultural history of Kathmandu, and each Durbar square is intricately linked with everyday life of local communities today as the cultural oases in the urban jungle of Kathmandu. The two-month long fieldwork conducted in the immediate aftermath of the earthquake (June-August 2015) focused on perspectives of 33 local residents who were involved in semi-structured interviews. Study findings indicate that the Newar communities of Kathamndu’s Durbar squares have strong sense of place based on their historical, cultural and, economic relation with the place over millennia. Living in closely-knit cluster of settlements and participating collectively in their cultural practices such as festivals, dances, rituals, prayers, and performances steered through indigenous guthi system with Durbar squares being their focal point, Newars have built strong identity and attachment with their place. Also, these, Durbar squares are significant tourism destinations today. When the earthquake caused spectacular destruction of heritage monuments, resident communities suffered a phenomenal tragedy that their place suddenly became a non-place, devoid of its historical grandeur. However, during the ongoing emergency, they safeguarded the heritage landscape day and night, searched valuable artifacts and safely inventoried them, and even organized interaction programmes at the community level for heritage reconstruction. Their transformative, resilient thinking enabled them to seek ways to make the structures stronger to resist future earthquakes and successfully steward the linkage with the future generations. Rising from the rubble, communities exhibited their knowledge, skills and capacities to mitigate the disaster to preserve their valuable heritage. This community perception of resilience is solely enhanced by their sense of place that provided them hope, strength, and vision for earthquake resistant reconstruction of the heritage monuments and revival of associated intangible culture. A unique exploration of very recent story of earthquake in Nepal, this study contributes to the role of sense of place for disaster community resilience. Exploration of community perception of resilience enhanced by the historical, spiritual and, cultural values associated with the place will help planners to seek ways to further strengthen local responses against future disasters; it will also help planners to devise appropriate heritage reconstruction initiatives driven by local stewardship, and formulate policy for responsible tourism operation to complement heritage revival.