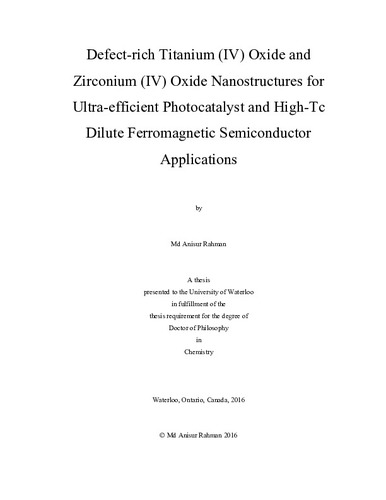 In transparent conductive oxide nanostructures, oxygen vacancy defects (neutral, singly charged, and doubly charged defects) are found to be one of the most important and prevalent defects due to the enhancement of light absorption and charge transport properties, improved performance in photoelectrochemical water splitting reaction driven by visible light, and the introduction of ferromagnetism. However, the traditional methods of creating of oxygen vacancies, including hydrogen thermal treatment, high energy particle bombardment, and thermal annealing under oxygen depletion condition, generate oxygen vacancies mostly at the surface of the nanostructures. The performance of these nanostructures is therefore limited to surface oxygen vacancies. More importantly, the surface oxygen vacancies are found to be highly susceptible to oxidation upon long-term exposure to air. In addition, the dependence of optical, photoelectrochemical, and magnetic properties on the surface morphology and oxygen vacancy defect composition of the one-dimensional transparent conductive oxide nanostructures are not well understood. For these reasons, there is a great interest in the development of a novel method to create oxygen vacancies both at the surface and in the bulk of transparent conductive oxide nanostructures. As two of the most important functional transparent conductive oxides, TiO2 and ZrO2 are specially preferred catalysts for photoelectrochemical water splitting reaction because of their suitable band edge positions for hydrogen evolution and exceptional stability against photocorrosion upon optical excitation. In the present work, highly oxygen-deficient TiO2 and ZrO2 nanostructures including nanobricks, nanopopcorns, nanowires and nanosheets are prepared on Si substrates by a one-step catalyst-assisted pulsed laser deposition method. The use of a high vacuum system and Ar flow, and precise control of the gold-nanoisland catalyst size, interfacial SiO2 layer thickness, and growth temperature have enabled us to produce oxygen-deficient single-crystalline nanostructured films with different morphologies and different composition of oxygen vacancy defects. The oxygen-deficient TiO2 nanostructures have been chosen as the starting point of the present study. For TiO2 nanowires reported to date, the oxygen vacancies have been found to form just within a few tens of nanometers at the outer surface of these nanowires, and the photocurrent density is significantly reduced by two to three orders of magnitude when ultraviolet light (<430 nm) is filtered out from the AM 1.5G simulated sunlight. Here, we demonstrate, for the first time, that by manipulating the thickness of the SiO2 buffer layer, together with appropriately optimized growth temperature and growth environment, it is possible to synthesize TiO2 nanobelts, and corrugated nanowires, straight nanowires, and tapered TiO2 nanowires decorated with TiO2-nanocrystallites using a one-step catalyst-assisted pulsed laser deposition method. We further show that the amount of oxygen vacancy defects depends on the growth temperature, while our electrochemical impedance measurement confirms the lower charge transfer resistances at the depletion layer of the decorated nanowires. Photoelectrochemical measurement under simulated sunlight (100 mW/cm2) shows that the photocurrent density measured at 0.5 V (vs Ag/AgCl) for the decorated nanowires (1.5 mA/cm2) is found to be significantly higher than those of nanobelts (0.18 mA/cm2), nanobricks (0.25 mA/cm2), straight nanowires (0.6 mA/cm2), and corrugated nanowires (0.94 mA/cm2). More importantly, the photocurrent density of defect-rich decorated nanowires is reduced only slightly from 1.5 mA/cm2 to 1.4 mA/cm2 when the ultraviolet light (<430 nm) is filtered out, which represents 87% of the overall photocurrent. The high activity in the visible region can be attributed to a larger amount of oxygen vacancy defects in decorated nanowires, and to the enhanced charge transfer from the nanocrystallites to the cores of the decorated nanowires. To extend the aforementioned method to other transparent conductive oxides, ZrO2 nanowires with different morphologies and compositions of oxygen vacancy defects have been prepared by tuning the gold-nanoisland catalyst size and growth temperature. The as-grown hierarchical ZrO2 nanowires (12.1 mA/cm2), consisting of individual ZrO2 nanowires decorated with ZrO2 nanoplates, have shown 1.9 times more photocurrent density than that of as-grown regular nanowires (6.4 mA/cm2). The photoelectrochemical performance of as-grown nanostructures has been further improved by partial delamination or flaking of the as-grown nanostructured film by a simple hydrofluoric acid treatment. The photocurrent density of the partially delaminated hierarchical nanowires, obtained after the HF treatment, is found to increase remarkably to 42.4 mA/cm2, i.e. nearly 3.5 times that of the as-grown hierarchical nanowires due to improvement of the composition of oxygen vacancy defects, charge carrier transport resistance, and specific surface area of the as-grown single-crystalline hierarchical nanowires. More importantly, the HF-treated partially delaminated hierarchical nanowire film electrode provides the highest cathodic photocurrent of 32.2 mA/cm2 (at −0.8 V vs reversible hydrogen electrode) in the visible light (>400 nm) region reported to date. The variation of the pulsed deposition growth temperature also produces ZrO2 nanostructures with different specific surface areas and amounts of oxygen vacancy defects, including nanobricks, nanopopcorns, nanospikes, and nanowires. The presence of different types of oxygen vacancies (neutral, singly charged, and doubly charged defects) and their correlation to the Zrx+ oxidation states (4>x>1) are found to affect the exchange interactions and the ferromagnetic properties of these nanostructures. The saturation magnetization measured at 2000 Oe for the nanowires (5.9 emu/g) is found to be significantly greater than those of nanospikes (2.9 emu/g), nanopopcorns (1.2 emu/g), and nanobricks (0.6 emu/g), while the coercivity for the nanowires (99 Oe) is approximately twice that of the nanobricks (50 Oe). More importantly, a Curie temperature (Tc) considerably above room temperature has also been observed for these ZrO2 nanostructures, including nanowires (700 K), nanospikes (650 K), nanopopcorns (550 K), and nanobricks (400 K). We also provide the first experimental evidence that it is the amount of defects in and not the phase of ZrO2 that controls the ferromagnetic order in undoped ZrO2 nanostructures. The present work therefore provides, for the first time, a direct correlation between the surface morphology and the composition of oxygen vacancy defects with the photoelectrochemical and ferromagnetic properties of the TiO2 and ZrO2 nanostructures.