Daptomycin: studies on its action mode and on bacterial resistance with model membranes 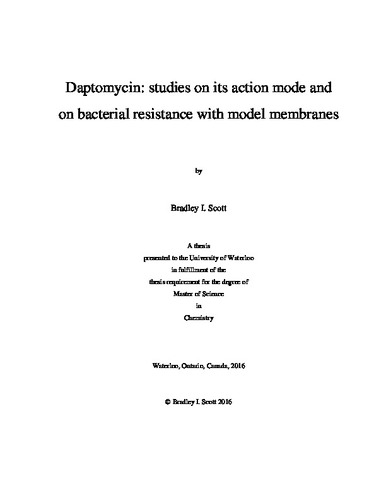 Bacterial resistance to antibiotics is one of the most serious problems facing medicine today. Recently, reports have appeared describing bacteria that are resistant to daptomycin (dap), an important antibiotic used against systemic infections caused by various Gram-positive (Gram+) bacteria, including methicillin-resistant Staphylococcus aureus (MRSA). This has caused considerable concern amongst the medical community. With few medicines being developed to replace them, research on antibiotics of last resort is imperative. Dap is a branched, cyclic lipodepsipeptide consisting of a 10-amino acid macrolactone ring to which is attached an exocyclic tripeptide bearing a decanoyl acyl tail. Its activity is calcium-dependent. The action mode best substantiated involves the killing of bacteria through specific interaction with phosphatidylglycerol (PG) in their cell membranes, followed by the formation of oligomeric, cation-selective pores and dissipation of membrane potential. The successive steps of the action mode have been investigated using fluorescence-based assays in model membranes. The steps include, 1) calcium-mediated binding of monomers to PG at the outer leaflet; 2) formation of oligomers; 3) formation of pores through equilibration and alignment of oligomers across both membrane leaflets. The assay fluorophores include the intrinsically fluorescent kynurenine residue in dap, and various environmentally sensitive labels attached to dap by chemical modification. The objective of this work was to investigate three topics: the means by which lysyl-phosphatidylglycerol (LPG) disrupts the action mode of dap, the means through which dap induces toxicity in humans, and the characterization of synthetic dap analogs, including an acyl-linked dimer. LPG is of interest because its increased formation is a known resistance mechanism for many cationic antimicrobial peptides (CAMPs); it is also correlated to resistance to dap specifically. A potential component in dap-induced toxicity is presence of phosphatidylserine (PS) in mammalian tissues. PS is a major phospholipid, and was investigated due to its anionic properties, which may emulate bacterial PG. The characterization of synthetic dap analogs allows for the study of the structure-activity relationship (SAR) of dap. The LPG, PS and characterization studies were pursued using the aforementioned fluorescence assays on a model membrane system using large unilamellar vesicles (LUV; liposomes), and antibacterial activity assays as needed. LUVs may be substituted with Bacillus subtilis L-forms (cell wall deficient bacteria) when necessary. Deviations in the assay results on LPG liposomes give insight into the action mode step(s) impeded in LPG-mediated bacterial resistance. The success or failure of the assays on PS membranes gives insight into the mechanism of toxicity via potential PS-mediated dap binding and permeabilization of mammalian cells. Characterization of the SAR of dap may lead to potential pharmacological improvements. Understanding these topics may also result in lipopeptides with improved activity on dap-resistant bacteria, modifications to the established mechanism of action, and suggestions for further investigations into dap toxicity. In parallel and in combination with these experiments, it was investigated whether secondary interactions between peptidoglycan precursors and dap are of importance in its action mode; the macromolecular synthesis of the cell wall has long been suspected to play a part in the mechanism of action of dap, either through inhibition of peptidoglycan synthesis or binding of teichoic acids. The investigation was pursued using minimum inhibitory concentration (MIC) tests on B. subtilis L-forms. The MIC tests incorporate two antibiotics: one being dap, and the other to up- or down-regulate the abundance of a peptidoglycan precursor. B. subtilis L-forms are capable of growth in the absence of peptidoglycan, therefore its presence as a model organism is essential. The regulation of the abundance of the peptidoglycan precursors should increase or decrease the MIC of dap depending on its reliance on that precursor. Understanding the reliance of dap on cellular binding sites, may result in lipopeptides with improved activity on dap-resistant bacteria and modifications to the established mechanism of action.