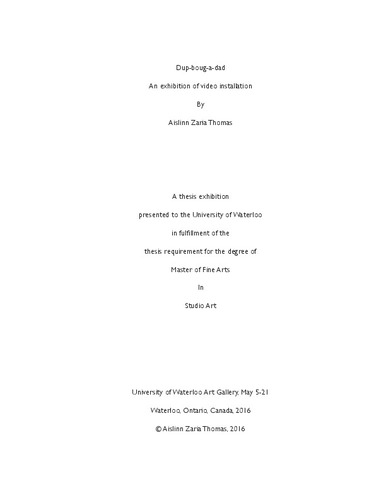 Dup-boug-a-dad is a video installation that is curious about different ways of being in the world. Its form and content address the body and some of the many ways of being bodied. In parts intervention, documentary, document, performance and music video, it features David Gunn, a friend of mine who has a physical and intellectual disability. David loves cheerleading. Living in rural Nova Scotia, as he does, his main access to the sport is through YouTube. The footage in Dup-boug-a-dad was taken when David visited Kitchener-Waterloo and practiced with the University of Waterloo cheerleading teams in 2015. David loves to sing. Being deaf, as he is, he sings in his own language. The song in Dup-boug-a-dad is, at least in part, about lifting a cheerleader up with one arm. He sang it while “hearing” his voice for the first time that we know of. This was made possible by his standing on a vibrotactile platform that vibrated in response to the sounds he made, translating his voice into a felt, tactile sensation. Two of these platforms and a vibrotactile bench are present in the gallery space. My artistic practice is quite varied in nature, so although I am exhibiting just one work in my MFA thesis show I wanted to write supporting documentation that spoke to the life and sustainability of a wide-ranging practice as a whole. As a result, the first section of this support document, How to Be In the World? touches on many of the concerns that currently inform my approach to art and life by grappling with title’s question. It’s written in a declarative (though not definitive) voice, and operates as a manifesto of sorts. I see it as both a record of my present stance and an aspirational text. While the concerns in How to Be In the World? have undoubtedly shaped my thesis exhibition in both obvious and subtle ways, the second section of this support document speaks more directly to, and about, this work. Dup-boug-a-dad: Process & Description and Installation describe the piece itself, its making, and the specifics of its life in the gallery.