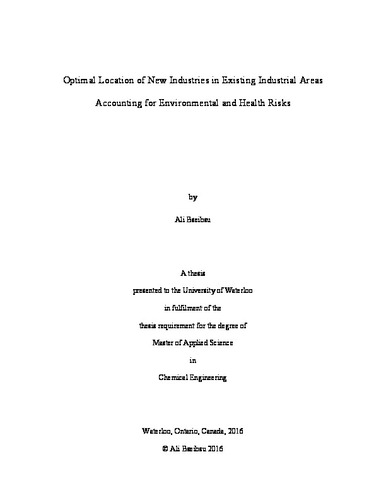 Nowadays, a major problem throughout the world is air pollution caused mainly by the fast growth in industry. This growth leads to negative impacts on human health and ecosystems directly or indirectly by chemical reactions in the atmosphere. The gas emissions from industrial plants are a current problem especially on ecosystems close to these sources. These emissions from large industrial complexes have been an increasing concern around the world. Due to the rapid growth of urban areas and the increase in the standard of living, environmental problems in urban areas become particularly critical. Selecting the location of industrial areas has been the traditional way for a community to lower the impact of industrial nuisance such as noise, smoke, odor, dust, dirt, and noxious gases. This growth concern accentuates the need for additional studies of air dispersions and modeling. The main objective of this thesis is to assess the potential impacts associated with the emissions of toxic air contaminants from new industrial plants in order to select the best location based on human health risk assessment. Air dispersion models have been widely used to study the patterns of dispersion and air emissions behavior as well as to simulate the dispersion and transport of pollutants. In this work, AERMOD model, which is recommended by the U.S. EPA, has been used to estimate the gas emissions of all significant sources in an industrial complex (taken as a case study), as well as the pollutant concentrations and distributions in the industrial complex area. In addition, in order to quantitatively assess potential changes in health impacts due to the gas emissions, IRAP View model, which is based on the Human Health Risk Assessment Protocol (HHRAP) for hazardous waste combustion facilities published by the U.S. Environmental Protection Agency (EPA), has been used to estimate the transport and fate of mercury from all proposed industrial plants in the area of concern. A case study that deals with locating a new industry in an existing complex was considered. Both environmental and health risks are considered in order to determine the best location for a new proposed plant. It is shown that considering both environmental impact as well as health risks leads to different best locations as compared to environmental impact alone.