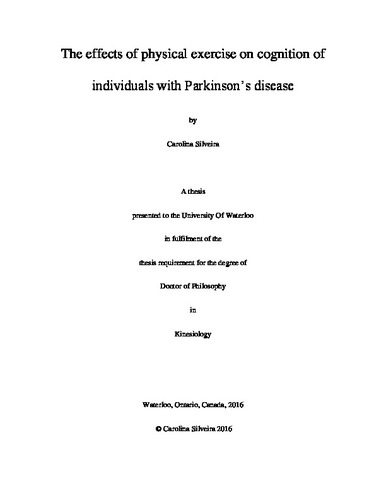 Despite motor symptoms being the hallmark of Parkinson’s disease (PD), cognitive decline has been shown to affect a large proportion of individuals with PD throughout the course of disease progression. Deficits in cognition have been associated with exacerbated motor dysfunction (i.e. gait), difficulties performing activities of daily living, and decreased quality of life among individuals with PD. The pattern of cognitive decline in PD is heterogeneous and not limited to disruptions in the basal ganglia-thalamo-cortical loops or dopamine depletion. Consequently, the treatment of these deficits is a major challenge. Since the capability of pharmacological therapies to treat cognitive deficits is limited, the combination of pharmacological and non-pharmacological strategies is encouraged. Among non-pharmacological strategies, physical exercise has shown some potential as a complementary strategy for the treatment of cognitive decline in PD. The general aim of this thesis was to investigate the effects of physical exercise on cognition in individuals with PD. The primary goal of Study 1 was to establish the thesis theoretical and methodological frameworks. Specifically, Study 1aimed to investigate the influence of PD on three cognitive processes (i.e. energization, task-setting, and monitoring) mediated by distinct frontal lobes areas that are anatomically connected to the basal ganglia. Three reaction time tasks were used to achieve this aim. Results from Study 1 showed that individuals with PD have selective deficits in monitoring. Importantly, these deficits were not alleviated by dopaminergic medication, confirming the need for complementary therapies to treat cognition in PD. Hence, Study 2 and Study 3 examined the acute (15- and 40-min post a single exercise session) and chronic (12-week exercise program) effects of aerobic exercise on energization, task-setting, and monitoring. Findings from these studies showed neither acute nor chronic effects of exercise on these cognitive processes. In order to address critical gaps in the literature, Study 3 also compared the effects of aerobic and goal-based exercises to a non-exercise control group on five different cognitive domains (attention/working memory, executive functions, memory, language and visuospatial processing) in cognitively normal and impaired individuals with PD. Results showed that only aerobic exercise improved executive functions in cognitively normal and impaired individuals with PD. In addition, Study 3 revealed that cognitively impaired individuals in the non-exercise control group showed worsening in cognition at post-test. Finally, Study 4 evaluated the effects of aerobic and goal-based exercises on cognition and gait, and examined whether changes in cognition could predict changes in gait after exercise. Findings from this study showed that aerobic and goal-based exercises improved cognition and dual-task gait in cognitively impaired individuals with PD. However, exercise-induced changes in cognition were associated with changes in gait only after aerobic exercise. In conclusion, this thesis showed that cognitive processes regionally organized within the frontal lobes did not improve after acute or chronic exercise stimulation in PD. However, aerobic exercise was shown to improve executive functions in both cognitively normal and impaired individuals with PD. Worsening in cognitive function found in the non-exercise control group over 12 weeks suggests that exercise may prevent cognitive decline in PD. Changes in cognition were positively associated with changes in gait in PD after aerobic exercise. Therefore, this thesis demonstrates that aerobic exercise may be a powerful complementary treatment of cognitive deficits in PD.

Carolina R. A. Silveira (2016). The effects of physical exercise on cognition of individuals with Parkinson’s disease. UWSpace. http://hdl.handle.net/10012/10469