The Atlas of Legal Fictions 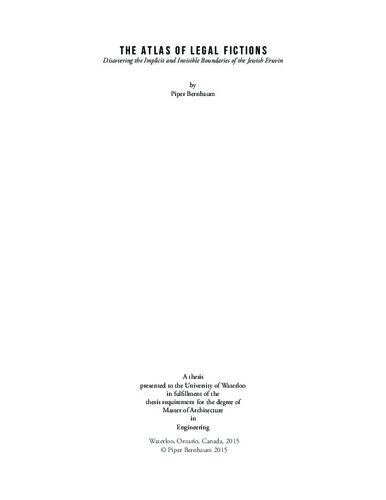 The Jewish Eruv is a defined physical area that symbolically extends the ‘home,’ beyond its walls and into the community. Purposefully built to be undetectable to the untrained eye, Eruvin are present, yet hidden, in the physical urban world around us. This spatial practice acts as a physical loophole; symbolically transforming space to provide leniencies to Orthodox Jewish communities. The Eruv demarcates a space of freedom on the Sabbath, but still maintains religious law that does not permit individuals to work or carry objects outside the private realm on the day of rest. Within the Eruv, the performance of daily activities becomes possible, and citizens are able to participate in their communities and cities. The establishment of these sacred boundaries creates a shared, privatized religious space within what is commonly recognized as the public realm. The Atlas of Legal Fictions plays a unique role in the world of map-making, depicting the unexplored and unseen reality of the Eruv, and its ability to negotiate space, people, community and spiritual practice within the plurality found in our urban surroundings. This atlas details the physical presence and conveys the spiritual allegory of Eruvin at all scales, which until now, have remained undocumented in the field of architectural and urban studies. Eruvin consequently alter the physical, social and symbolic interpretations and uses of cities; varying in size and shape, and utilizing many pre-existing natural or man-made elements as their boundaries, they embed themselves within the urban context. The basic construction of the Eruv, commonly made of timber posts connected with fishing line, represent the walls and roof of a house where tradition and assimilation, the new and the old, intermingle. Referred to as a legal fiction — an assertion accepted as true — the Eruv is used to create community, maintain practice, and integrate individuals into their surroundings through personal commitment and connection to their authority. By exploring its physical components, urban considerations, and social consequences, The Atlas of Legal Fictions, considers the Eruv as an architecture of necessity, critical to the practice of place-making and establishment of community. As architecture’s minimum, the Eruv transforms the existing fabric of a city into a physical space with a multiplicity of meanings. The Eruv, built by people, for people, has the potential to indicate the desired and functional scale of community. Focusing on Eruvin built for the Diaspora communities, this thesis contributes to the study of these boundaries while preserving their sacred existence, and ultimately illuminates how community and religion can harmoniously negotiate their survival in the modern world. The Atlas of Legal Fictions reveals a little known reality, uncovering the nature of these religious boundaries and exposing the factual existence of what is considered fiction in the modern world.