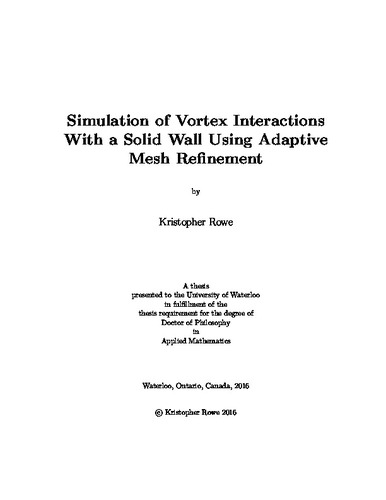 One feature that is common to many fluid flows is that phenomena of interest often occur at disparate length scales, whether it be vortices interacting with a boundary layer, or shear instabilities on an internal gravity wave. It has been demonstrated in many studies that when performing computer simulations of fluid flows, one must ensure that sufficient resolution is used to capture the smallest scale features of the flow. If the smallest scale features of the flow occur in a small subset of the problem domain, however, much of the computational resources used for a simulation will be wasted where they are not needed. In order to address these kinds of problems, a class of algorithms known as adaptive mesh refinement (AMR) seek to use grid resolution only where it is needed. Upon a coarse base grid, areas of a fluid flow where small scale features occur are identified, and a hierarchy of successively finer grids is build until sufficient resolution is obtained. We give a thorough review of the adaptive mesh refinement algorithm for the incompressible Navier-Stokes equations presented in Martin, Colella, and Graves (2008) and connect their techniques to the literature for finite volume methods. The performance and scalability of their algorithm on a commodity computer cluster is studied in order to systematically choose optimal grid parameters. This algorithm is then used to perform a number of simulations of vortices interacting with a viscous boundary layer. Following Clercx and Bruneau (2006), the interaction of a vortex dipole with a solid wall is modelled: a problem which has been suggested as a difficult physical benchmark for incompressible Navier-Stokes solvers due to the resolution needed to obtain the correct behaviour for the flow. The interaction of a vortex ring with a solid wall is also simulated for a variety of Reynolds numbers. The results of these simulations are shown agree well with those seen in laboratory experiments. A loop-structured secondary vortex ring is formed which undergoes a topologically complex interaction with the initial vortex ring, ultimately leading to the breakdown and dissipation of both vortex rings. Emphasis is placed on the performance of AMR when compared to a traditional single grid model, and subsequently, the ability of AMR methods to model fluid flows using direct numerical simulation at higher Reynolds numbers than were previously possible.