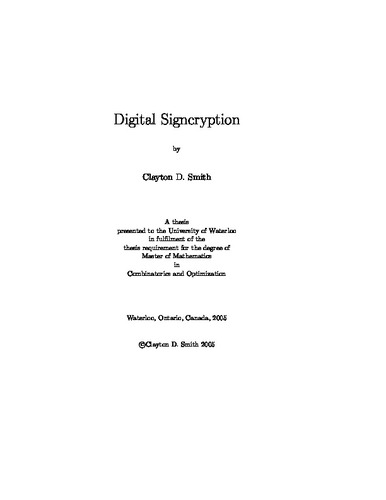 Signcryption is a new cryptographic primitive which simultaneously provides both confidentiality and authenticity. Previously, these two goals had been considered separately, with encryption schemes providing confidentiality and signature schemes providing authenticity. In cases where both were required, the encryption and signature operations were simply sequentially composed. In 1997, Zheng demonstrated that by combining both goals into a single primitive, it is possible to achieve significant savings both in computational and communication overhead. Since then, a wide variety of signcryption schemes have been proposed. In this thesis, we present a number of the proposed signcryption schemes in terms of a common framework. For the most part, the material has been previously presented in various research papers, but some previously omitted proofs have been filled in here. We begin by giving a formal definition of the signcryption primitive, complete with a security model. Then we look at some of the various proposed signcryption schemes, and consider their relative advantages and disadvantages. Finally, we look ahead at what future progress might be made in the field.