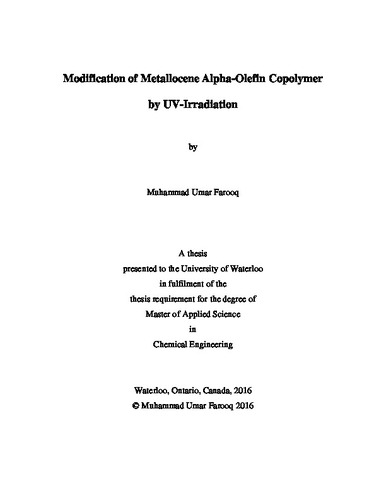 Linear low density polyethylene (LLDPE) is used widely in applications like lamination and agricultural films, as well as a modifier for low density (LDPE) and high density (HDPE) polyethylene. LLDPE is made by polymerizing ethylene with small amounts of alpha-olefins typically 1-butene, 1-hexene or 1-octene, to form a copolymer in a low pressure process. The LLDPE used in this thesis contained 93 – 100% ethylene by weight and 0 – 7% by weight 1-hexene as comonomer. The melt strength of LLDPE can be modified by introducing long chain branching (LCB) to its backbone and there are several techniques to accomplish that. In this work, free radicals are formed by adding benzophenone (BP) as a photo-initiator and by irradiating solid sheets of the LLDPE resin by using a UV lamp. As a result, LCB affects the rheological properties and this has been studied in this thesis. UV irradiation via a mercury lamp was conducted using a design of experiments (DOE), implemented to elucidate the effects of three factors: BP concentration, time of irradiation and intensity of the UV lamp. The DOE stated 20 different sample runs to be done to better understand the changes in the rheology of the samples due to variation in the three factors. The experiments began with addition of BP to the copolymer pellets in a batch mixer for homogenous mixing at 190 ᵒC and 100 RPM for 5 – 7 minutes after which the LLDPE-initiator blend was pelletized and compression – molded in a hot press at 190 ᵒC for 3 minutes at 20000 lbf. The pressed sample sheets were then irradiated using the UV lamp for specific time period and lamp intensity according to the DOE. Pressurized air was used to cool down the area beneath the lamp which ranged from 31 – 37 ᵒC before and after irradiation and 71 – 77 ᵒC during batches. Discs of 25 mm diameter and 1 mm thickness were subsequently cut from pressed irradiated sheets and were used for testing in the rotating parallel plate rheometer. Different graphs and trends were prepared to analyze the rheology of each sample by strain and frequency sweep for 0.1 – 10 % strain and 0.1 – 100 Hz frequency, respectively. After determining the linear viscoelastic region, Storage, Loss and Crossover Moduli, Cole-Cole plot, Zero Shear and Complex Viscosity, Polydispersity Index, Modulus of Separation and ER, were studied for further understanding. All the results pointed to the fact that the MW was increased and LCBs/crosslinking was induced and hence, broadening effect of MWD in the samples was eventually seen, when BP, time and UV intensity were increased. Differential Scanning Calorimetry (DSC) was later used to determine the melting and crystallization characteristics of all samples produced. Small chunks cut from the irradiated LLDPE sheets were inputted in the DSC apparatus and heat flow curves were extracted. The first heating cycle was neglected to omit any history the sample might have. The cooling cycle was used to analyze the onset crystallization temperature, crystallization enthalpy and the crystallization temperature. The second heating cycle was used to extract the melting temperature, enthalpy of melting and the onset melting temperature. The percentage crystallinity was also calculated to check which sample gave the highest amorphous content after UV treatment due to branching. Statistica was used to analyze the significance of factors studied and interactions between them. In terms of rheological polydispersity, the effects of processing conditions on ER were evaluated at a 5% significance level, and it was found that: (i) All three factors studied (BP concentration, irradiation time, lamp intensity) had a positive effect on ER, thus, increasing LCB and broadening MWD. (ii) The two-factor interactions of BP concentration-irradiation time and BP concentration-lamp intensity had also a positive effect on ER, thus, increasing LCB and broadening MWD. In terms of the melting and crystallization characteristics of the irradiated samples, the effects of all three processing conditions were evaluated and it was found that: (i) Onset crystallization temperature and crystallization enthalpy were significantly affected by BP concentration and UV intensity. (ii) Crystallization temperature was significantly affected by BP concentration. (iii) Melting temperature was significantly affected by irradiation time. (iv) Onset melting temperature was significantly affected by UV intensity. In general, the results obtained in this research work show that UV irradiation can easily be used to modify LLDPE. Results from the statistical analysis can be used to form models for guiding further experiments in order to optimize the level of LCB in materials with controlled architecture. Future work can focus on developing direct correlations between processing conditions and LCB and MWD by using gel permeation chromatography measurements. Also, the effect of gel content on rheological behavior can be isolated from that of LCB.