A Software Toolchain for Physical System Description and Synthesis, and Applications to Microfluidic Design Automation 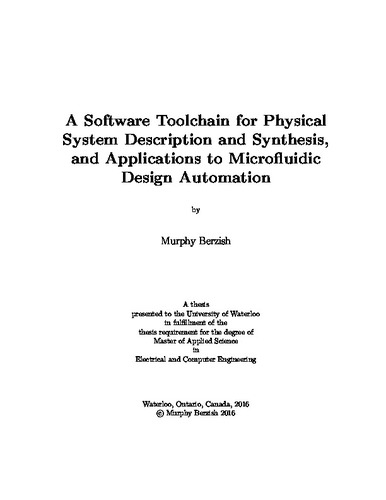 Microfluidic circuits are currently designed by hand, using a combination of the designer’s domain knowledge and educated intuition to determine unknown design parameters. As no microfluidic circuit design software exists to assist designers, circuits are typically tested by physically constructing them in silico and performing another design iteration should the prototype fail to operate correctly. Similar to how electronic design automation tools revolutionized the digital circuit design process, so too do microfluidic design packages have the potential to increase productivity for microfluidic circuit designers and allow more complex devices to be designed. Two of the primary software engineering problems to be solved in this space relate to design entry and design synthesis. First, the circuit designer requires a programming language to describe the behaviour and properties of the device they wish to build, and a compiler toolchain to convert this description into a model that can then be processed by other software tools. Second, once such a model is constructed, the remaining portions of the design toolchain must be constructed. It is necessary to implement software that can find unknown design parameters automatically to relieve the designer of much of the complexity that goes into creating such a circuit. Furthermore, automated testing and verification tools must be used to simulate the device and check for correctness and safety requirements before the engineer can have confidence in their design. In this thesis I outline work that has been done towards both of these goals. First, I describe a new programming language that has been developed for the purpose of describing and modelling physical systems, including but not limited to microfluidic circuits. This programming language, called “Manifold”, has been implemented following principles and features of modern functional programming languages, as well as drawing inspiration from VHDL and Verilog, the two industry-standard programming languages for EDA. The Manifold high-level language compiler carries out the process of translating a system description into a domain-agnostic intermediate representation. This representation is then passed to a domain-specific backend compiler which can perform further operations on the design, such as creating simulations, performing verification, and generating appropriate output products. Second, I perform a case study with respect to the creation of such a domain-specific backend for the domain of multi-phase microfluidic circuits. The process involved in taking a circuit description from design entry to device specification has a number of significant steps. I discuss in detail these steps with respect to the design of a multi-way droplet generator circuit. Such a circuit is difficult to design because of the behaviour of the key design parameter, the volume of generated droplets. The design goal is for each droplet generator on the device to produce droplets of a certain specified volume. However, the equation relating the properties of a droplet generator to the predicted droplet volume is complex and contains several nonlinearities, making it very difficult to solve by traditional methods. Recent advances in constraint solvers which can reason about nonlinear equations over real-valued terms make it possible to solve this equation efficiently for a given set of design constraints and goals, and produce many feasible specifications for droplet generators that meet the requirements. Another difficulty in designing these circuits is due to interactions between droplet generators. As the produced droplets have a significant hydrodynamic resistance, they affect the behaviour of the circuit by causing perturbations in the flow rates into the droplet generators. This has the potential to alter the volume of droplets that are being produced. Therefore, a means of regulating or controlling the flow rates must be found. I describe a potential solution in the form of a passive element analogous to a capacitor in an electrical circuit. Once an appropriate value for the capacitor is chosen, it remains to verify that it operates correctly under manufacturing variances in fabrication of the device. To perform this verification, a bounded model checker for real-valued differential equations is employed to demonstrate correctness or discover robustness issues. Furthermore, a simulation file for the MapleSim numerical simulation engine is generated in order to perform whole-design tests for further validation. The sequence in which these steps are performed closely follows the concept of “abstraction refinement” in formal methods, in which successively more detailed models are checked and a failure in one step can invoke a previous step with new information, allowing errors to be caught early and introducing the ability to iterate on the design. I describe such a refinement loop in place in the microfluidics backend that integrates these three steps in a coherent design flow, able to synthesize and verify many specifications for a microfluidic circuit, thereby automating a significant portion of the design process. The combination of the Manifold high-level language and microfluidics backend introduces a new design automation toolchain that demonstrates the effectiveness of constraint solvers in the tasks of design synthesis and verification. Further enhancements to the performance and capabilities of these solvers, as well as to the high-level language and backend, will in the future produce a general-purpose design package for microfluidic circuits that will allow for new, complex designs to be created and checked with confidence.